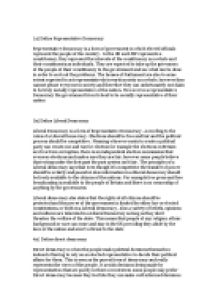 Types of Democracy and Ways of Participating.

﻿1a) Define Representative Democracy Representative democracy is a form of government in which elected officials represent the people of the country. In the UK each MP represents a constituency, they represent the interests of the constituency as a whole and their constituents as individuals. They are expected to take up the grievances of the people of their constituency to the government and see what can be done in order to sort out the problems. The houses of Parliament are also to some extent expected to act representatively towards society as a whole, however they cannot please everyone in society and therefore they can unfortunately not claim to be truly socially representative of the nation. ...read more.

For example free press and free broadcasting is available to the people of Britain and there is no censorship of anything by the government. Liberal democracy also states that the rights of all citizens should be protected and the power of the government is limited by either law or elected constitutions, or both in a Liberal democracy. Also a variety of beliefs, opinions and cultures are tolerated in a Liberal Democracy as long as they don?t threaten the welfare of the state. This means that people of any religion, ethnic background or race can come and stay in the UK providing they abide by the laws of the nation and aren?t a threat to the state 4a) ...read more.

For the conservative party It costs £5 a year if you’re under 23 £25 a year If you’re aged 23 or over. As a member of a political party you get special voting rights such as choosing who represents the party in local, general and European elections and you can also take part in decision making at a local level and you can also meet MP’s, local officials and attend party conferences Another way you can participate in politics is by donating funds to the party of your choice. The advantages of this are that the party you are donating money to will have ore funds to use in their electoral campaign when election season comes around and this could lead to them winning the election. Should the party you donated money to win the election it can give u a satisfactory feeling that you helped them gain power. ...read more.