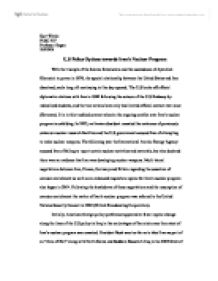 Kurt Wintje PLSC 327 Professor Regan 10/05/06 U.S Policy Options towards Iran's Nuclear Program With the triumph of the Islamic Revolution and the ascendance of Ayatollah Khomeini to power in 1979, the special relationship between the United States and Iran dissolved, and a long rift continuing to this day opened. The U.S broke off official diplomatic relations with Iran in 1980 following the seizure of the U.S Embassy by radicalized students, and the two nations have only had limited official contact ever since (Katzman). It is in this troubled context wherein the ongoing conflict over Iran's nuclear program is unfolding. In 2002, an Iranian dissident revealed the existence of previously unknown nuclear research facilities and the U.S government accused Iran of attempting to make nuclear weapons. The following year the International Atomic Energy Agency accused Iran of failing to report certain nuclear activities and materials, but also declared there was no evidence that Iran was developing nuclear weapons. Multi-lateral negotiations between Iran, France, Germany and Britain regarding the cessation of uranium enrichment as well as an enhanced inspection regime for Iran's nuclear program also began in 2004. ...read more.

Another botched Mid-East occupation could spread chaos and terrorism all over the Middle East, destabilizing other regional U.S allies, which would be disastrous to the U.S economy at home because of the almost certain spike in oil prices (Eisenstadt). If the Bush Administration chooses to go down the regime change path, it will likely take the form of providing financial and other resources to existing Iranian pro-democracy groups whose goal is the overthrow of the current theocratic regime. The U.S has already begun initial moves in this direction by creating Radio Farda, which broadcasts an anti-regime, pro-Western message inside Iran. The U.S has also boosted the number of Persian speaking diplomats in diplomatic missions around Iran, in order to increase coordination with dissident expatriate groups and foster increased Iranian participation in democracy promotion programs. The weakness of the existing groups committed to regime overthrow make this tempting policy option unlikely to succeed, however. Also, the massive overt support that the U.S would need to provide these groups would likely make them even more unappealing to ordinary Iranians, as they will likely be seen as U.S sponsored puppets (Katzman). ...read more.

Further, a crippling strike on Iran's nuclear program will likely move Iran towards pursuing a covert program, completely removed from IAEA inspections. Such a scenario would be disastrous and avoided at all costs (Salama). Until recently, the Bush Administration appeared content to sit on the sidelines while multi-lateral negotiations between Iran and U.S allies occurred. After the talks broke down, the matter was referred to the UN Security Council who voted to order Iran to suspend all uranium enrichment or face sanctions. This is where the matter lies today. Critics accuse the Bush Administration of neglecting the Iranian issue and "outsourcing" diplomacy on the matter to allies, whose views may differ significantly from the U.S and are not worried about serving American interests. In the future, the U.S may need to directly engage with Iran, if only to persuade the rest of the world that the U.S is serious in exhausting all possible options and that drastic action in the form of sanctions - or in the worst possible scenario - military action must be taken (Katzman). Undoubtedly, the Bush Administration faces a number of foreign policy issues in theaters around the world. The Iranian nuclear crisis does not have an easy solution, and each policy option presents risks and rewards. ...read more.