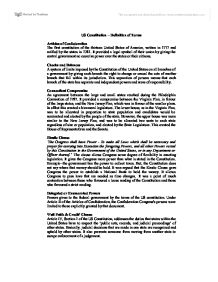 US Constitution - Definition of Terms Articles of Confederation The first constitution of the thirteen United States of America, written in 1777 and ratified by the states in 1781. It provided a legal symbol of their union by giving the central government no coercive power over the states or their citizens. Checks and Balances A system of limits imposed by the Constitution of the United States on all branches of a government by giving each branch the right to change or cancel the acts of another branch that fall within its jurisdiction. This separation of powers means that each branch of the state has separate and independent powers and areas of responsibility. Connecticut Compromise An agreement between the large and small states reached during the Philadelphia Convention of 1787. It provided a compromise between the Virginia Plan, in favour of the large states, and the New Jersey Plan, which was in favour of the smaller plans. In effect this created a bicameral legislature. The lower house, as in the Virginia Plan, was to be allocated in proportion to state population and candidates would be nominated and elected by the people of the state. However, the upper house was more similar to the New Jersey Plan, and was to be allocated two seats to each state regardless of size or population, and elected by the State Legislature. ...read more.

Many state governors in the United States have line-item veto power with respect to at least some kinds of legislative enactment. Presidents Nixon, Ford, Reagan, Bush, and Clinton have all endorsed the idea of granting the President line-item veto powers over appropriations bills as a means of controlling the budget deficit problem, but the President of the United States has only recently acquired a very limited line-item veto power through certain changes in the rules of the House of Representatives and Senate. In 1998, the U.S. Supreme Court ruled that even this limited form of line-item veto enacted by a simple Congressional majority was unconstitutional. Marbury vs. Madison, 1803 A landmark case in United States law. It formed the basis for the exercise of judicial review in the United States under Article III of the Constitution. This case resulted from a petition to the Supreme Court by William Marbury, who had been appointed by President John Adams as Justice of the Peace in the District of Columbia but whose commission was not subsequently delivered. Marbury petitioned the Supreme Court to force Secretary of State James Madison to deliver the documents, but the court, with John Marshall as Chief Justice, denied Marbury's petition, holding that the statute upon which he based his claim, the Judiciary Act of 1789, was unconstitutional. Marbury v. ...read more.

Large states supported this plan, while smaller states, which feared losing substantial power in the national government, generally opposed it, preferring an alternative put forward by the New Jersey delegation on June 15. The New Jersey Plan proposed a single-chamber legislature in which each state, regardless of size, would have one vote, as under the Articles of Confederation. In the end, the convention settled on the Connecticut Compromise, creating a House of Representatives apportioned by population and a Senate in which each state is equally represented. Three-fifths Compromise Compromise between Southern and Northern states reached during the Philadelphia Convention of 1787 in which three-fifths of the population of slaves would be counted for enumeration purposes regarding both the distribution of taxes and the apportionment of the members of the United States House of Representatives. Delegates opposed to slavery generally wished to count only the free inhabitants of each state. Delegates supportive of slavery, on the other hand, generally wanted to count slaves in their actual numbers. Since slaves could not vote, slaveholders would thus have the benefit of increased representation in the House and the Electoral College; taxation was only a secondary issue. The final compromise of counting "all other persons" as only three-fifths of their actual numbers reduced the power of the slave states relative to the original southern proposals, but increased it over the northern position. ...read more.