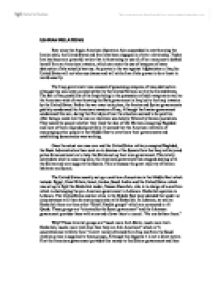 US-IRAN RELATIONS Ever since the Anglo-American Operation Ajax succeeded in overthrowing the Iranian shah, the United States and Iran have been engaged in a bitter relationship. Today Iran has become a powerful nation that is threatening to use all of her resources to defend herself from an American invasion, which can mean the use of weapons of mass destruction if she actually has any. As proven in the war against Afghanistan or Iraq the United States will not take any chance and will strike Iran if she proves to be a threat to world security. The Iraqi government was accused of possessing weapons of mass destruction although this was never proved neither by the United Nations nor by the United States. The fear of the possibility of the Iraqis being in the possession of such weapons as well as the American wish of overthrowing the Bath government in Iraq led to the Iraqi invasion by the United States. Before the war even took place, the Iranian and Syrian governments publicly condemned the American invasion of Iraq. Although the Iranian government condemned this war, during the first days of war the situation seemed to be positive. After being a week into the war an interview was held in Tehran by Iranian journalists. ...read more.

The first one would be the "counter-proliferation targeting" which consists in targeting the sites of the weapons of mass destruction. Another target which was set last year was the one of "decapitation." This consists in "overthrowing leadership" and replacing the government with a democratic form of government. "Terrorism targets" is another part of the "contingency planning." The President of the United States has been publicly convincing the people that the Iranians have been crossing the border into Iraq and have been killing Americans. Although this has not changed the opinion of the people Bush continuously tries to find reasons to attack Iran. Before there was even the option of a nuclear attack on Iran but some members of the Joint Chief Staff were very troubled by this and warned the Bush Administration that they would resign if the war was going in that direction. Therefore the plan was cancelled. A year back also five generals and admirals wanted to resign due to with similar excuses. We can see that the war in Iraq is going to be repeated in Iran. The wish of the Bush Administration to declare war on Iran is clear. The United States wants to maneuver the situation like they did against Iraq in order to declare war on Iran. ...read more.

The third possibility is that Osama bin Laden has gone north towards Turkmenistan, Tajikistan or Uzbekistan or gone west towards Iran. This is just a small possibility but it cannot be discarded. The last possibility is Pakistan. "I don't think Osama bin Laden could be in Pakistan," although "anyone can come across those [streams from the Afghani border]." "This border is impossible to seal completely." "There are innumerable routes coming in." There is a possibility that terrorists achieve to enter Pakistan. The ISI (Pakistani Government Intelligence Service) is misled by Musharraf. The Jaish-e-Mohammed terrorist organization, which was behind the kidnapping and murder of the American journalist Daniel Pearl, was linked with the Pakistani Intelligence according to New York Times and the Newsweek. Evidence was found that even his killers might have been agents of the Pakistani government. The Pakistani intelligence under the supervision of Musharraf has played a part in terrorist activities. Peace with India and the War on Terrorism are the major issues Musharraf is faced with. He has encouraged and sponsored terrorist groups in Kashmir and at the same time fails to "completely seal" his borders from Taliban terrorists. "The world is counting on Musharraf to help steer South and Central Asia from local chaos to regional security" although he proves to be inadequate for what is in Pakistani interests. ...read more.