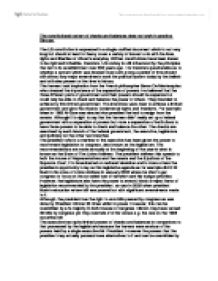 US politics.The constitutional system of checks and balances does not work in practice. Discuss.

The constitutional system of checks and balances does not work in practice. Discuss. The US constitution is expressed in a single codified document which is not very long but should at least in theory cover a variety of issues to do with the lives, rights and liberties of citizen's everyday. Written constitutions have been known to be rigid and inflexible, therefore, US society is still influenced by the principles that led to its establishment over 200 years ago. It is therefore questionable as to whether a system which was devised over such a long a period of time should still without any major amendments work the political system today by the beliefs and attitudes present at the time in history. The framers took inspiration from the French philosopher Baron De Montesquieu who stressed the importance of the separation of powers. He believed that the three different parts of government and their powers should be separate but could only be able to check and balance the power of others. They intended to achieve by this limited government. The intentions were clear to achieve a limited government and give the citizens fundamental rights and freedoms. For example when in 1992 Al-Gore was elected vice president he had to resign from the senate. Although it is right to say that the framers didn't really set up a federal government with a separation of powers but more a separation of institutions to have those powers to be able to check and balance the other. ...read more.

This enables them to limit what the president can and can not do. The legislature has further powers which are not as significant and have over time fallen into disuse. Congress can declare war however, the last time this was used was in 1941, the war against Japan. Although, congress does have a few more significant powers to check and scrutinise the actions of the executive, they have the power to ratify the treaties negotiated by the president, this requires a ? majority. For example the Test Ban Treaty was rejected; it was 14 votes from ratification. Not only does congress confirm treaties but also appointments made by the President, be it for high judicial posts or heads of important agencies i.e. the FBI. A simple majority is required for confirmation yet it still ensures congress has a say in such great matters. For example President Reagan's nominee Robert Bork was rejected from joining the Supreme Court in 1987. The president himself and other members of the executive's actions and policies can be investigated, as was done in 2001 over Bush's handling of national security issues before and after September 11th. Congress can go further if they find that a member of the executive has acted improperly. The House of Representatives tend to be the ones who impeach and the accused will then be tried by the Senate, and if found guilty then removed. ...read more.

The spirit of Partisanship proved against the success of President Clinton as he failed to enforce his Health Reform Bill. However, it is felt that there may be a result of gridlock, where the president and the senate don't really get much done and for example the senate ends up blocking or rejecting proposals from the executive. This was clear as President Clinton and the Republican controlled congress formed an impasse and as a result due to the lack of finance parts of the Federal Government had to be shut down. Although, it has been said that the divide in government is actually an advantage as both parties take on a more partisan approach this leads to a more effective government. It is felt that when the president and congress are of the same party legislation, treaties, appointments etc are pushed through without much real scrutiny however, with the divide in government bills, legislation will all be more carefully monitored and scrutinised. However, it has been argued that the divide in government isn't always an advantage and can actually result in a political backlash for example it was felt that the impeachment proceedings conducted against the Democratic President Clinton by a Republican congress were highly politicised. Yet overall despite the minor drawbacks the system still stands firm. The system of checks and balances has proved useful, therefore to an extent the intentions of the Framers when setting up the constitution has been met. ...read more.