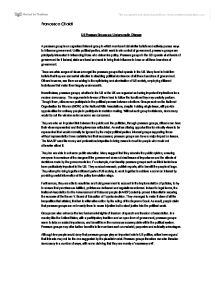 US pressures groups are undemocratic, discuss

US Pressure Groups are Undemocratic, Discuss A pressure group is an organised interest group in which members hold similar beliefs and actively pursue ways to influence government. Unlike political parties, which seek to win control of government, pressure groups are principally interested in influencing those who determine policy. Pressure groups in the US operate at all levels of government be it federal, state and local and seek to bring their influence to bear on all three branches of government. There are wide ranges of views amongst the pressure groups that operate in the US. Many tend to hold firm beliefs that they are somewhat effective in disabling political dominance of all three branches of government. Others however, see them as adding to the splintering and atomisation of US society, employing different techniques that make them largely undemocratic. Nevertheless, pressure groups, whether in the US or the UK are regarded as having important implications for a modern democracy. The arguments in favour of them tend to follow the functions they may usefully perform. Though them, citizens can participate in the political process between elections. Groups such as the National Organisation for Women (NOW) ...read more.

Again, it is apparent that pressure groups are a cause to the shattering of democracy in the US. Furthermore, many people may see them as representing public interest, but other subscribe to the fact that in the long run they are only really representing their own special interests. This can be in two different ways, firstly, through iron triangles and then through other methods. In terms of iron triangles, the term is used to describe the strong relationship between pressure groups, congressional committees and the relevant government department. All these three bind together in such as strong way that they guarantee the policy outcomes to befit all three parties involved. Many argue that obviously they develop such wall of resistance in order to benefit themselves and their members, abusing the triangle in reality. In short, people claim that they build relations with the congressional committees and departments to further pursue their own needs. The existence of these iron triangles raises the question of whether pressure group activities are compatible with a pluralist society. A pluralist society, as expressed by Robert Dahl, is one in which political resources such as money, expertise and access to both government and the mass media are spread widely and are in the hands of many diverse individuals and groups. ...read more.

These often have a major effect on elections. Moral Majority used 527 groups to attack liberal Senators through negative ads during the 1980 Congressional Elections. These attacks managed to unseat all those targeted, including Senator McGovern (D-SD), and replaced them with conservatives in the "Reagan Sweep". Negative advertising often doesn't portray the truth about candidates, constructing the language in a way to make them seem like they've said or done something they haven't, in no way does this positively contribute to the decisions of the electorate or to democracy in general. Pressure groups are an essential dimension of any democracy, yet they can endanger democracy if interest groups undermine the public interest or if the methods they use are corrupt or intimidating. In a democratic society, different forms of lobbying are essential to protect sections of society. The problem arises where greed and self-interest affects the rights of the public as a whole. To reach a firm conclusion, it is clear that pressure groups are to a degree very undemocratic, namely because of the methods they undertake. Yet, it must be made clear that they do perform key roles that seem to strengthen democracy rather than weaken it, and as long as power is not abused, pressure groups do not undermine the democratic process of the US. ?? ?? ?? ?? Francesca Cifaldi ...read more.