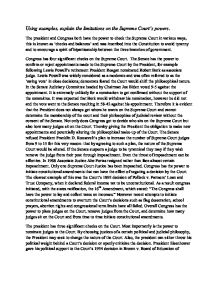 Using examples, explain the limitations on the Supreme Courts powers.How do Presidents veto legislation, and how significant is the presidential veto?

Using examples, explain the limitations on the Supreme Court's powers. The president and Congress both have the power to check the Supreme Court in various ways, this is known as 'checks and balances' and was inscribed into the Constitution to avoid tyranny and to encourage a spirit of bipartisanship between the three branches of government. Congress has four significant checks on the Supreme Court. The Senate has the power to confirm or reject appointments made to the Supreme Court by the President, for example following Lewis Powell's retirement President Reagan nominated Robert Bork as associate judge. Lewis Powell was widely considered as a moderate and was often referred to as the 'swing vote' in close decisions; democrats feared the Court would shift the philosophical nature. In the Senate Judiciary Committee headed by Chairman Joe Biden voted 9-5 against the appointment. It is extremely unlikely for a nomination to get confirmed without the support of the committee. It was expected that Bork would withdraw his nomination, however he did not and the vote went to the Senate resulting in 58-42 against his appointment. Therefore it is evident that the President does not always get whom he wants on the Supreme Court and cannot determine the membership of the court and their philosophies of judicial review without the consent of the Senate. ...read more.

Although Nixon was not officially impeached due to his resignation, he would most certainly have been impeached by Congress had he not resigned. It states in the Constitution the power of pardon is granted to the president "expect in cases of impeachment", therefore one might argue that Ford's pardon was unconstitutional. However, due to the controversy generated by pardons, presidents have significantly decreased its usage and are mostly used in uncontroversial cases. On his final day of his presidency, President Clinton pardoned 140 people including fugitive Mark Rich, whose former wife had made large monetary donations to Clinton's election campaigns and had given expensive personal gifts to the president and the first lady. In contrast, George W. Bush pardoned only 189 people in eight years. There are further, though less significant, checks on the Supreme Court. The Supreme Court has no power of initiation; the Court must wait until a case is brought forward. Many presidents, politicians and commentators have been of the view that the War Powers Act (1973) may be unconstitutional. However, the Court has been unable to rule on the matter because no case regarding this Act has appeared before it. The Court possesses no powers of enforcement. In 1954 the Court announced in Brown v. ...read more.

Congress may attempt to override the presidential veto; however with the required two-thirds in both houses this is highly difficult and unlikely. Lastly Congress may realize that they both not have the required votes to override the veto, do nothing and accept that the president has won, this is the most likely overcome of a presidential veto. During Bill Clinton's eight years as president, he used the presidential veto on 36 occasions. Congress attempted to override 13 out of 36, it failed in 11 and only succeeded in just two. Thus, President Clinton won 34 out of 36 occasions when he vetoed legislation. In order to override the presidential veto a required two-thirds majority in both of houses of Congress in needed, therefore the presidential veto is immensely significant. Due to the decrease in bipartisanship in Congress, a bill is unlike to have the majority of support and while it may in the Senate, it may not in the House. The power of veto is inscribed into the Constitution to serve as a check on Congress and encourage a spirit of bipartisanship between Congress and the president. How significant is the role of political parties within Congress? Section B: To what extent is there disagreement about how effectively the Constitution protects freedom? "Members of Congress are more concerned with local issues than with national or international issues." Discuss. "There are no effective checks on presidential power." Discuss. ...read more.