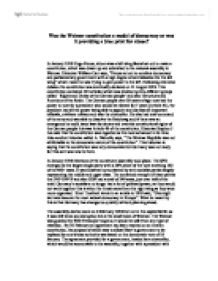 Was the Weimar constitution a model of democracy or was it providing a blue print for abuse?

Was the Weimar constitution a model of democracy or was it providing a blue print for abuse? In January 1919 Hugo Preuss, whom was a left wing liberal set out to make a constitution, which was drawn up and submitted to the national assembly in Weimar. Historian William Carr says, "Preuss set out to combine democracy and parliamentary government with a high degree of centralisation for the left wing" which meant he was trying to give power to the left. Following extensive debates the constitution was eventually declared on 11 August 1919. This constitution contained 181 articles which was divided up into different groups called ' Rights and Duties of the German people' and also 'Structures and Functions of the Reich. The German people over 20 years of age now had the power to vote for a president who would be elected for 7 years (Article 41), the president had all the power being able to appoint and dismiss all-important officials, civilians military and also the chancellor. He also had total command of the army and was able to dissolve the Reichstag and if there was an emergency he could issue laws by decree and override constitutional rights of the German people this was Article 48 of the constitution. ...read more.

The expectation was that in normal circumstances ministers responsible to the Reichstag should govern Germany but under article 48 of the constitution the president was given powers to intervene in an emergency. Article 48 says that if a state fails to perform the duties imposed upon it by the federal constitution or by federal law, the president...may enforce performance with the aid of the armed forces. If public order and security are seriously disturbed or endangered within the Federation, the President may take all-necessary steps for their restoration, intervening, if need be, with the aid of the armed forces, and he can also dissolve the Reichstag by suspending civil liberties. This was a good article if used wisely as Article 48 emergency laws, were there to support the state through hardship and a potentially dangerous method for abusing power as this was described as a suicide clause. But this would only be a threat if the Right Wing got control of the government, which did happen when Hitler came to power. Historian John Hiden said "most Germans appeared to see the president as a sort of emperor substitute". He says this, as the German people were used to only having one person in charge of the country. ...read more.