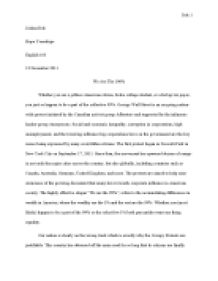 We Are The 100%. Many agree with the cause and consider the Occupy Movement to have several valid points. Protestors and observers of the movement are outraged by the state of the economy and feel that the government is not doing everything it can to hel

﻿Dok Joshua Dok Hope Yoneshige English 103 12 December 2011 We Are The 100% Whether you are a jobless American citizen, broke college student, or a fed up tax payer, you just so happen to be a part of the collective 99%. Occupy Wall Street is an on-going nation-wide protest initiated by the Canadian activist group Adbusters and supported by the infamous hacker group Anonymous. Social and economic inequality, corruption in corporations, high unemployment, and the towering influence big corporations have on the government are the key issues being expressed by many crest-fallen citizens. The first protest began in Zuccotti Park in New York City on September 17, 2011. Since then, the movement has spawned dozens of camps in not only the major cities across the country, but also globally, including countries such as Canada, Australia, Germany, United Kingdom, and more. The protests are aimed to help raise awareness of the growing discontent that many have towards corporate influence in American society. The highly effective slogan ?We are the 99%?, refers to the accumulating differences in wealth in America, where the wealthy are the 1% and the rest are the 99%. Whether you (most likely) happen to be a part of the 99% or the select few 1% both percentiles want one thing: equality. Our nation is clearly on the wrong track which is exactly why the Occupy Protests are justifiable. ...read more.

(Dwyer) While President Obama lends his support, prospective 2012 republican Presidential candidate Michelle Bachman is not as receptive to the movements? cause stating: A vocal minority called Occupy Wall Street believes that the problem we face is capitalism or free markets. It?s not. The problem is government doing what both the constitution and decent morality prohibit, that is cronyism capitalism, or forcefully taking your money for the purpose of paying off a politician?s political friends. For your sake and your future, America, and Occupy Wall Street in particular, needs to wake up and stop blaming job creators for the failures created by selfish politicians who wink at their political donors. (Goldman) Although polls that have been conducted have indicated support for the protests by a large number of Americans, it still has yet to convince the major players that make up neither the 1% nor the entire 99% for that matter. Even though the amount of media attention that has focused on these protests has brought a lot of support, it has also harnessed many criticisms. While the protestors have been gaining momentum, the movement itself has been accused of causing more problems than it is solving. There are many problems with the protests that outweigh any of the proposed advantages. At the protest locations, crime and health concerns have run rampant and have also become sites of unwanted violence and sexual assaults. ...read more.

There needs to be a policy change that both sides can agree upon. A big problem is that corporations do not create jobs anymore because they send them overseas in order to make higher profits for themselves. So basically, the 1% are creating jobs just for the 1%. But looking at the big picture, this is hurting the economy because the 99% don?t have the income in order to pay for services provided by corporations because all the jobs are overseas. This is one reason (out of many) as to why both sides heavily depend on one another for survival. So maybe one of the policy changes could be no more sending jobs overseas and rather keeping the jobs here in the U.S. There are many problems on both sides that could be solved if they got together and formulated a plan in order to bring back social and economic growth. The solution is coming together as a complete 100%. A nation divided is no nation at all. Regardless of the issues at hand, however, the Occupy Wall Street protests may well be the start of a new era in America. If not that then it will definitely have a spot in history along with the Civil Rights and Women?s Rights Movements. It has raised public consciousness so much so that the nations? focus has shifted. But America will not see this shift happen until the 99% and 1% call a treaty on this class warfare and become one. Only as a complete 100%, can the American social and economic dream be re-attained. ...read more.