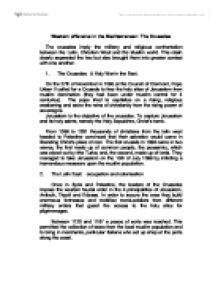 Western offensive in the Mediterranean: The Crusades.

Western offensive in the Mediterranean: The Crusades The crusades imply the military and religious confrontation between the Latin, Christian West and the Muslim world. This clash clearly separated the two but also brought them into greater contact with one another. 1. The Crusades: A Holy War in the East. On the 27th of November in 1095 at the Council of Clermont, Pope Urban II called for a Crusade to free the holy sites of Jerusalem from muslim domination (they had been under muslim control for 4 centuries). The pope tried to capitalise on a rising, religious awakening and seize the reins of christianity from the rising power of sovereigns. ...read more.

2. The Latin East: occupation and colonisation Once in Syria and Palestine, the leaders of the Crusades impose the western feudal order in the 4 principalities of Jerusalem, Antioch, Tripoli and Edesse. In order to secure the area they build enormous fortresses and mobilise monk-soldiers from different military orders that guard the access to the holy sites for pilgrimmages. Between 1120 and 1187 a peace of sorts was reached. This permitted the collection of taxes from the local muslim population and to bring in merchants, particular Italians who set up shop at the ports along the coast. Nevertheless, contact between the different civilisations remained circumscribed. The Poulains, however, ate an eastern diet, dressed in local attire, and the Italians brought back from the east silk, glass, sugar, paper, etc. ...read more.

beginning in the mid XII century. Edesse was seized in 1144 causes Bernard de Clairvaux to call for a second crusade. This, however, proves ineffective and in 1187, the Sultan of Egypt, Saladin, takes control of Jerusalem and the whole Latin East except the coastline. The 3rd crusade (1187-1192) wasn't successful in reconquering the Holy Land. The fourth crusade (1202-1204), modified in its goals by the Venetians, sets its sight on Constantinople, taking control of the city and establishing a latin empire rather than the Byzantine empire. Notwithstanding the diplomatic efforts that existed between leaders of the 2 civilisations, the crusades succeeded only in reinforcing the mutual distrust and incomprehension between christians in the west, byzantines and muslims. ...read more.