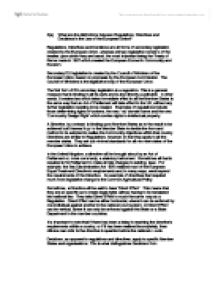 What are the distinctions between Regulations, Directives and Decisions in the Law of the European Union?

2(a)        What are the distinctions between Regulations, Directives and Decisions in the Law of the European Union?

Regulations, Directives and Decisions are all forms of secondary legislation created by the European Union, whereas primary legislation consists of the treaties upon which they are based, the most important being the Treaty of Rome made in 1957 which created the European Economic Community and Euratom.

The first form of EU secondary legislation is a regulation. This is a general measure that is binding in all its parts and is also directly applicable.  In other words, it creates law which takes immediate effect in all the Member States in the same way that an Act of Parliament will take effect in the UK, without any further legislation needing to be created.  Examples of regulations include those determining rights of workers, the new ‘.eu’ domain name and the new ‘Community Design Right’ which confers rights to intellectual property.

A Directive, by contrast, is binding upon Member States as to the result to be achieved but it leaves it up to the Member State to decide the form and method to be adopted to realise the Community objectives within that country.  Directives are similar to Regulations, however, in that they apply to all the member states.  They set out minimal standards for all member states of the European Union to achieve.

In the United Kingdom, a directive will be brought about by an Act of Parliament or, more commonly, a statutory instrument.  Sometimes all that is required is for Parliament to make simple changes to existing laws.  For example, the Sex Discrimination Act 1975 realised most of the European Equal Treatment Directive’s requirements and, in many ways, went beyond the requirements of the Directive.  An example of directives that required much more legislative change is the Common Agricultural Policy.

It is important to note that if there has been a delay in reaching the directive’s requirements within a country, or if it has been realised incompletely, then citizens can refer to the directive in question before the national courts.

Examples of Decisions include the Commission ruling on proposed mergers and contemporary agricultural matters such as setting standard prices for vegetables.

Other forms of secondary EU legislation include Recommendations and Opinions.  However, these are not binding upon member states in any way.