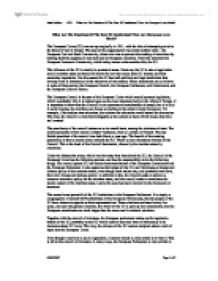 What Are The Functions Of The Four EU Institutions? How Are European Laws Made?

What Are The Functions Of The Four EU Institutions? How Are European Laws Made? The European Union (EU) was set up originally in 1951, with the idea of attempting to solve the threat of war in Europe. The start of this organisation was under another name - the European Coal and Steel Community, whose aim was to prevent the making of munitions by holding back the supplies of coal and steel to European countries. From this stemmed the European Economic Community, which today comes under another title; the EU. The influence of the EU is mainly in economic areas. However, the EU is also a legal order and all member states are bound to follow the law that arises from EU treaties and their secondary legislation. For this reason the EU has both political and legal institutions that develop laws in furtherance of the objectives of the treaties. These institutions are as follows in order of their power; the European Council, the European Parliament, and Commission and the European Court of Justice. The European Council is the part of the European Union which actually passes legislation, which is probably why it is looked upon as the most important body in the whole of Europe. It is important to know that the Council is not a permanent membership of people, but it is fluid. In each meeting, the members are chosen according to the subject under discussion. For example, if the subject was education, the minister for education would attend the discussion. This way, the Council is more knowledgeable at the subject at hand, which means that time isn't wasted. The presidency of the council rotates on a six month basis, among the ministers of state. ...read more.

Even though the commission houses a representative from each member state, they are not allowed to take instructions from their country. They are supposed to be independent, and only represent the interests of the citizens of the EU as a whole. The only criticism of the commission is that it is not elected by the people of the EU, but by the governments of each member state. Because the commission is the executive, eurosceptics argue this case. Even though the commission has no legislative power though, it is the only part of the EU which can draft European Laws. The commission always has an elected President, which the European Council chooses, but this decision must be agreed by the European Parliament to make it more democratic. The remaining commissioners are then appointed from each member state by their government, in agreement with the president who must decide the role of each commissioner. Finally the commission as a whole must be approved by the parliament, to make it as democratic as possible. Also, the European Parliament has the right at any time for the commission to resign through a vote of no confidence. This requires a vote that makes up at least two-thirds of those voting and a majority of the total membership of the Parliament. While it has never used this power, it threatened to use it against the Commission headed by Jacques Santer in 1999, with the result that the whole Commission resigned of its own accord. The enlargement of the Union on 1 May 2004 increased the number of member states from 15 to 25, and had an effect on the make-up of the Commission. ...read more.