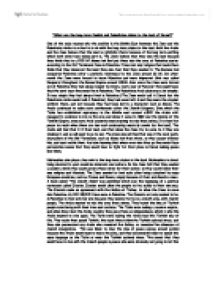 &quot;What are the long-term Jewish and Palestinian claims to the land of Israel?&quot;

"What are the long-term Jewish and Palestinian claims to the land of Israel?" One of the main reasons why the conflict in the Middle East between the Jews and the Palestinian Arabs is so bad is to do with the long term claims to the land. Both the Arabs and the Jews believe that the land is rightfully theirs because of the long term settling which both sides have taken part in. The Jews believe that they own the land because they think that in c.1200 BC Moses led God put them into the area of Palestine and so according to the Old Testament Jews in Palestine. It was not only religion that made them think that they deserved the land; they also feel that they needed it. The Romans had conquered Palestine after a periodic resistance by the Jews around 63 BC. But after revolt the Jews were forced to leave Palestine and were dispersed (this was called Diaspora) throughout the Roman Empire around 135AD. Ever since the Jews were forced out of Palestine they had always longed to return, every year at Passover they would hope that the next year they would be in Palestine. ...read more.

The Jews needed to feel safe after being attacked by many European countries, such as France and Russia, simply because of their anti-Semitic views. A book called "The Jewish State" was published which was the beginning of a political movement called Zionism. Zionism would allow the people to live safely in their own way. The Zionists made an agreement with the Sultan of Turkey, to allow the Jews to move into Palestine. By 1914 85,000 Jews were in Palestine. The Zionists not only wanted to be in Palestine to feel safe but also because they wanted to live in a Jewish area, with Jewish people. The Arabs wanted to rule the area them selves. They hated the idea of Turkish people interfering with their lives and customs. The Turks were making a massive empire, and when they ruled the Arabs country they gave them no independence, which is why the Arabs wanted to rule again. The Turks were making the Arabs lead the Turkish way of life. They made them speak Turkish, the made them follow the Turkish national dress, and they also persecuted any Arabs who resented the Sultan, or resented his allowance of Jewish immigration. ...read more.

This would make the Arabs feel betrayed by the English as the land they thought they would be getting has now got to be shared with the Jews, and the British government were making interfering decisions without the consent of the Arabs. When both sides has seen that Britain has been promising both sides land then this would make them less likely to make peace because Britain, potentially a peace making country is now ruled out of helping as both the Jews and the Arabs would hate the British, so would not want to communicate with them to make a new deal, especially after they betrayed and lied to them after World War one. All of the above make peace harder to get to, the long term claims makes both sides believe that the land is already theirs, for religious reasons or just simply already being there. The nationalist argument means both the sides are wanting independence and would be willing to fight (there fore not being peaceful towards each other). And finally the war makes it even harder for the British especially to help make peace between the two countries. ...read more.