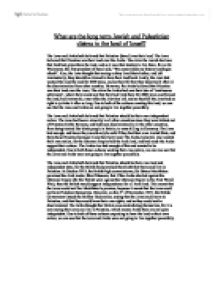 What are the long term Jewish and Palestinian claims to the land of Israel?

What are the long term Jewish and Palestinian claims to the land of Israel? The Jews and Arabs both believed that Palestine (Israel) was their land. The Jews believed that Palestine was their land over the Arabs. The claim the Jewish had was that God had given them the land, and so it was their destiny to live there, for as Dr. Weizmann, the first president of Israel said, "We cannot deny our history and begin afresh". Also, the Jews thought that seeing as they lived there before, and left involuntarily; they should be allowed to have their land back. Lastly, the Jews had wanted the land the land for 2000 years, and so they felt that they deserved it after all the discrimination from other counties. ...read more.

The Jews and Arabs both believed that Palestine should be their own independent nation. The Jews had been a minority in all other countries since they were kicked out of Palestine by the Romans, and had been discriminated in all the other countries, from being treated like black people in Britain, to mass killing in Germany. The Jews had enough, and knew they would only be safe if they had their own Jewish State, and they chose Palestine because it was their holy land. The Arabs, however, also wanted their own nation, for the Ottoman Empire had the Arab land, and had made the Arabs support their culture. The Arabs also had enough of this and wanted to be independent. ...read more.

This meant that the Jews would not like MacMahon's promise, because it meant that the Jews could not have Palestine themselves. However, on the 2nd of November, 1917, the British Government issued the Balfour Declaration, saying that the Jews could move to Palestine, and that they would have their own rights, and so they could not be discriminated. The Arabs thought that Britain was contradicting themselves, for it is now saying that Jews can live in Palestine, which means Arabs there are not quite independent. Due to both of these cultures expecting to have the land as their own nation, we can see that the Jews and Arabs were not going to live together peacefully. ...read more.