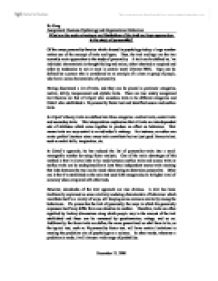 What are the main advantages and limitations of the trait and type approaches to the study of personality?

What are the main advantages and limitations of the trait and type approaches to the study of personality? Of the many personality theories which abound in psychology today, a large number makes use of the concept of traits and types. Thus, the trait and type are the two currently main approaches to the study of personality. A trait can be defined as, 'an individual characteristic in thought feeling and action, either inherited or acquired and refers to tendencies to act or react in certain ways' (Drever 1964). Type can be defined by a person who is considered as an example of a class or group of people, who have a same characteristic of personality. Having discovered a lot of traits, and they can be placed in particular categories, motive, ability, temperament and stylistic traits. There are two widely recognized trait theories are that of Allport who considers traits to be different categories and Cattell who established a 16-personality factor test and identified source and surface traits. In Allport's theory, traits are defined into three categories: cardinal traits, central traits and secondary traits. ...read more.

Hippocrates' theory of the four humours is that very easy and simple to understand. His theory consists four fluids: yellow bile, black bile, high blood pressure and phlegm. However, this approach has a main disadvantage. Because this theory was created in ancient Greece, it is a very dated theory and modern science tells us that the belief in four humours in the body is largely inaccurate. After it, many more modern and scientifically up to date theories have now been established. Compared with Hippocrates' theory, probably, Sheldon's typology, which is based on temperamental characteristics as well as body type, is the best known modern physical typology. This theory grossly oversimplifies personality and there are three body types: endomorph, mesomorphy, and ectomorphy. Sheldon's theory reflects high correlations between the body types and the features of temperament, but he did not take the proper precautions to allow for rater' biases. Moreover, Sheldon assumed a connection between physique and temperament. However, he only offered relevance into physical structure in relation to its affect on personality and it has not been disproved that physique holds no bearing over people's personality. ...read more.

Because a simple introversion-extroversion dichotomy is unlikely to be descriptive enough, due to the vast variability among people Jung introduced four functions: Sensing, Thinking, Feeling and Intuition. This approach concentrates on the information processing characteristics of the individual. This theory is very useful for the study of investment decisions and implementation of management science techniques. The managers with the sensation-thinking characteristics and their willingness to accept management science techniques were identified. However, in a comparatively recent study of personality types in relation to the success of small retailers, there was no convincing support for any purposeful link between Jung typology and the performance of small businessmen, however the thinking extrovert did best as a small retailer. Generally speaking, compared with the both of trait and type approaches, it is difficult to predicate which approach is better to the study of personality. As mentioned before, type approach is less complicated but much fair, however as it tends to oversimplify and not identify fully that individuals vary. The trait approach is more detailed overall as the theories concerned identify individuals characteristics, but it categorises people more complicated and lengthy if done accurately. Therefore, we should select the different approach to use according to the different situations. Ke Kang Assignment: Business Psychology and Organisational Behaviour December 11, 2000 ...read more.