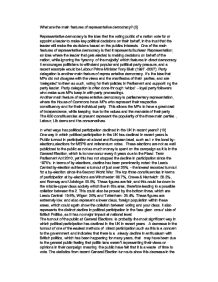 What are the main features of representative democracy? In what ways has political participation declined in the UK in recent years?

which has been happening for many years, that may have been due to the general public feeling that politicians weren't representing their views or opinions in their campaign meaning the public have felt that it is a waste of time to vote. The statistics from recent General Election turnouts show this decrease in the voting, as we can see that the last five general elections have been considerably less than in previous years. In 1992, voter turnout was 77.7%, but dropped to an all-time low in 2001, with less than 60% of the population turning out to vote (59.4%). Although there has been a rise in recent years to 65.1%, a statistic drawn from the 2010 General Election, it is nowhere near the 77.7% turnout mark seen in 1997; many people will say that a drop in the level of political confidence in recent years being the cause of this, which shows paralells with the current economic climate, showing a lack of consumer confidence, it is the same in politics, with Britain going through a turbulent few years due to the tax scandal as well as minister scandals such as the saga with Liam Fox, all of which shows the confidence is low which is reflected in the voting. ...read more.

count for anything and therefore would be a waste of time as we would know who the winner would be In these seat. An example of this would be Radlett which only had a 64.7% turn out in 2010, and Liverpool Riverside, which only had a 52.1% turnout, with 60% of its voters voting labour. This means that voting in these constituencies is considerably lower than it should be as it is not competitive, there is only going to be one winner. As a majority of the seats available are 'safe seats', this means a considerable amount of the populations vote is wasted in these areas, meaning only about 160 constituencies and the peoples within these vote count as these are the ones which change hands like a pendulum each general election. To try and change this, the coalition; made up conservatives and lib dems, tried to change the voting system from first past the post to AV, creating a referendum on it called Electoral Reform, which was made into a referendum in 2011. This was the first time a conservative party used a referendum, as it was under pressure from the lib dems to do so. Unfortunately, the public did not like the idea of AV, and voted overwhelmingly against it, with 67.9% of the 42.2% of the population who voting saying no. ?? ?? ?? ?? ...read more.