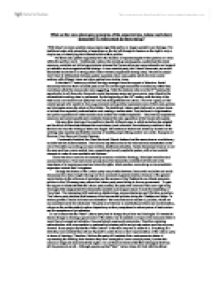 What are the main ideological principles of the conservatives, Labour and Liberal democrats? To what extent do they overlap? With today's common practise many people argue that parties no longer operate by an ideology

What are the main ideological principles of the conservatives, Labour and Liberal democrats? To what extent do they overlap? With today's common practise many people argue that parties no longer operate by an ideology. The traditional scale with extremities of anarchism on the far left through to fascism on the right is only a simple way of classifying the different beliefs within politics. The three main parties supposedly have the function of representing the wide spectrum of views within the politics world. Traditionally Labour, the current governing party, symbolizes the mixed economy, socialists and left wing principles whereas the Conservatives are more autocratic and support privatisation and are against radical change. A more centrist party, the Liberal Democrats, are social- democratic and believe in strong public sector welfare programmes among many. Numerous people find it hard to differentiate between parties especially when main parties subdivide into smaller sections with different views and when parties have similar views. In the late 19th century a political ideology emerged form the support of Marxism. Social democracy believed that a socialist party could evolve through democratic revolutionary rather than evolutionary that the communists were suggesting. After the electoral reform in the 19th century the opportunity for all those who favoured a social democracy arose and more power was offered to the enfranchised working class in parliament. By the beginning of the 20th century with the help of the trade union movement a new party had evolved calling themselves Labour. ...read more.

The hierarchy society at the time gave the conservative ideology great authority, allowing only a few people to make imperative decisions and control society. The party therefore believe in privatisation which would benefit an individual instead of society. Traditionally they are against social and political change such as emancipation of women, the legislation on abortion and easier divorce and pro social discipline and law and order. After the reform act it was obvious that the conservatives had to represent a majority which is those who were in lower classes and social positions therefore in the 19th century evolved into "one nation" conservatism which emphasized uniting British people. The fight then emerged where traditional conservatives argued that a society that was naturally, hierarchical meaning those who are wealthy are privileged should have responsibilities for those who are not. Liberal conservatives also disagreed with "one nation" ideology. It believed that the government should be "free" from regulating the economy but unlike the liberals do not believe that individuals can make moral decisions and think a strong state should be implemented to maintain public order. "The new right" ideology is coherent to the liberal conservatives and emerged when Thatcher was in government. The ideology centred on the scheme that there should be a small government which cut taxation and government spending to encourage enterprises, it believed in free-market capitalism to maximise scope of market forces therefore pro American and was against deeper European irrigation. ...read more.

* We should not have gone to war in Iraq - it's time to restore trust in the Government. * Take the environment seriously - cut pollution, cut congestion, and boost renewable energy. Labour Policies Conservatives WHAT WE WILL DO Action on tax Action on schools Action on hospitals Action on crime Action on asylum & immigration All three parties have highlighted the most popular issues within Britain and have come up with similar ways on how they think they can improve. How can the electorate be sure that their policies and ideas will be implemented or improved or understand the difference between parties? I believe the electorate no longer vote for the extremities in ideology or according to class. I feel people want to see a party that is pragmatic and sovereign. Through this I believe Labour moved more central and even under the leadership of Michael Howard the Conservatives left. Although this goes against their original values such as Labour's socialist beliefs turning into capitalist ones or Conservatives taking more centrist views it is what gains votes and theoretically is a form of democracy. Parties also have a combination of beliefs within them which makes it even harder to differentiate: some people may agree, depending on the issue, with different parts of the ideology spectrum, therefore overlap with various parties, who should they vote for? Although different parties have different beliefs they all want to progress and sometimes there is only one way forward and that's why I believe ideologies may overlap. Could the real question is just how much do parties keep to their promises? ...read more.