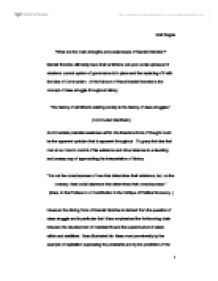 &quot;What are the main strengths and weaknesses of Marxist histories&quot;?

Matt Eagles "What are the main strengths and weaknesses of Marxist histories"? Marxist theories ultimately have their ambitions set upon social upheaval of whatever current system of governance is in place and the replacing of it with the idea of Communism. At the fulcrum of these Marxist theories is the concept of class struggle throughout history. "The history of all hitherto existing society is the history of class struggles." (Communist Manifesto) An immediate potential weakness within the Marxist school of thought could be the apparent cynicism that is apparent throughout. To grasp the idea that man is no more in control of his existence and circumstances is a daunting and uneasy way of approaching the interpretation of history. "It is not the consciousness of men that determines their existence, but, on the contrary, their social existence that determines their consciousness." (Marx, in the Preface to A Contribution to the Critique of Political Economy.) However the driving force of Marxist histories is derived from the question of class struggle and in particular that Marx emphasized the forthcoming clash between the development of material life and the superstructure it exists within and stabilizes. Marx illustrated his ideas most prominently by the example of capitalism supressing the proletariat and by the prediction of the development of socialism, and ultimately communism from capitalism. ...read more.

Through Marx's perception of Materialism it is the understanding that reality is only material: matter and energy. There are not Gods or any supernatural phenomenon, politics and beliefs exist solely due to economic climate and positioning. Induced by the ruling classes throughout history to serve as means of social control, this is directly related to the question surrounding the struggle of class and the argument of False Consciousness. Again contrary to Hegel's work of Idealisms Marx indeed "stands him on his head". However to abandon the widespread beliefs that are commonplace in most societies is a weakness as to the widespread acceptance of Marxist historical teachings. For example, through practical everyday life wage-labourers reproduce themselves physically, i.e. work to earn money in order to buy food, shelter and clothing they need to survive. This is at the heart of Historical Materialism. Wage-labourers as part of their "jobs" engage in production, production of the things they need to buy in order to survive. An underlying theme then to the class struggle is the capitalist way of ruling without mercy. The capitalist system being based on private ownership of the means of production, which gives the power to very few. Marx himself mounted a full-scale attack on the theories, institutions, and philosophies of industrial capitalism. ...read more.

The resulting system was that socialism, would bring a society which was based on collective ownership of the means of production, rational economic planning, equal distribution of goods and services, and lastly, production for the human need, the example of the Marxist dialectic in full swing. Marx focuses on the theory of history rather than an empirical way of telling history how it is. Unlike historians such as Elton who believe in absolute objectivity or Carr with theories of selection and invention of fact, Marx's perception of histories tend to cross into philosophical and cultural debates as well as those of historiographical nature. Marx can ultimately be attributed to the emergence of histories regarding groups of people rather than the individual being available and is an indication of Marxists histories relevance and one of its strengths. Contrary to this can individuals be disregarded throughout history as in Marxist teachings. According to Marx the importance of the individual is benign due to the social climate of the time and economic position the individual is privy to taking precedence over and rubbishing any innate talent or ability that key political or historical figures may possess. This almost fatalistic attitude has such strong cynical roots it may be a step to understanding the shroud of uncertainty as to the acceptance and understanding of Marxist histories. ...read more.