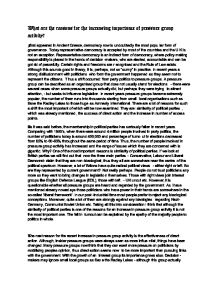 What are the reasons for the increasing importance of pressure group activity?

What are the reasons for the increasing importance of pressure group activity? First appeared in Ancient Greece, democracy now is undoubtedly the most popular form of governance. Today representative democracy is accepted by most of the countries and the UK is not an exception. Representative democracy is an indirect form of democracy, where policy making responsibility is placed in the hands of decision-makers, who are elected, accountable and can be got rid of peacefully. Certain rights and freedoms are recognised and the Rule of Law exists. Although this sounds good in theory, it is, perhaps, not so "sunny" in practice. In recent years a strong disillusionment with politicians who form the government happened as they seem not to represent the citizens. Thus a shift occurred: from party politics to pressure groups. A pressure group can be described as an organised group that does not usually stand for elections - there were several cases when some pressure groups actually did, but perhaps they were trying to attract attention, - but seeks to influence legislation. In recent years pressure groups became extremely popular, the number of them runs into thousands starting from small local organisations such as Save the Radley Lakes to those huge as Amnesty International. ...read more.

The fall in turnout can be explained by the apathy of the majority people to politics in whole. The next reason for the recent increase in pressure group activity is the effectiveness of direct action. Although, insider pressure groups were always seen as more influential, things have been changed. Many pressure groups now think that they can exert more pressure on politicians by mobilising peoples opinion, thus direct action seems now to be more important than pursuing links with the government. With the growth of an interest group its importance grows also. Decision-makers may ignore small local groups as Save the Radley Lakes - although this group actually reached success - but they cannot simply turn the blind eye to those like Amnesty International. Many people take part in the demonstrations of those interest groups, thus they are recognised and their issues are put on the political agenda. But not only size matters. Fathers for Justice provide us with a great example of how effective a pressure group can be if its members are really committed. Although they claim that they have tens thousands members only 20 of them actually took part in the demonstrations. But they have used 'stuns' by dressing as superheroes and climbing London's architectural heritage. ...read more.

However, sometimes think tanks fall in the trap of corporate lobbying of some sectional pressure groups and begin to act in the interests of those groups rather that the citizens. A good example of a pressure group operating on all stages of the decision-making process is the Countryside Alliance which was debating against fox hunting ban in the period 2003-2004 [although they did not succeed]. Considering all this, I think that the increase in the number of access points is probably the main reason for an increase in pressure group activity. New institutions give people more opportunities to influence decision-making process and they use this chance by participating in pressure group activity. Thus, there are quite a lot of reasons for an increase in pressure group activity, some of which are definitely more important than others. From those that are mentioned I consider the rise in the number of access-points to be the crucial one. Moreover nowadays people can make 'those at the top' to hear them by using direct action. The secret of success of pressure groups is 'never give up'. If the government rejects the ideas of a pressure group it may turn to the courts and thus will have a chance to force politicians to change legislation. Compiled by Dariia Halatova 07/12/11 ...read more.