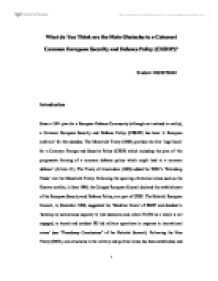 What do You Think are the Main Obstacles to a Coherent Common European Security and Defence Policy (CESDP)?

What do You Think are the Main Obstacles to a Coherent Common European Security and Defence Policy (CESDP)? Student: 2003079040 Introduction Since a 1954 plan for a European Defence Community (although not realised in reality), a Common European Security and Defence Policy (CESDP) has been 'a European ambition' for five decades. The Maastricht Treaty (1993) provides the first 'legal basis' for a Common Foreign and Security Policy (CFSP) which including the plan of 'the progressive framing of a common defence policy which might lead to a common defence' (Article J.4). The Treaty of Amsterdam (1999) added the WEU's 'Petersberg Tasks' into the Maastricht Treaty. Following the spurring of external crises such as the Kosovo conflict, in June 1999, the Cologne European Council declared the establishment of the European Security and Defence Policy, as a part of CFSP. The Helsinki European Council, in December 1999, suggested the 'Headline Goals' of ESDP and decided to 'develop an autonomous capacity to take decisions and, where NATO as a whole is not engaged, to launch and conduct EU-led military operations in response to international crises' (see "Presidency Conclusions" of the Helsinki Summit). Following the Nice Treaty (2002), new structures in the military and political areas has been established, and the co-operation in the area of CFSP/ESDP has been enhanced. However, the development of a coherent CESDP still has a long way to go. This essay discusses current challenges to CESDP. The first part analyses the EU' institutional structure and decision-making process, which impede the development of a coherent CESDP. Then we have a look at the EU's military capability. The relationship between the ESDP and Nato/US is discussed in the third part. Finally a conclusion is provided. Institutional Structure and Decision-making Process The first obstacle is resulting in the three pillar structure of the EU. Since the Maastricht Treaty in establishing the CFSP, the structure of the CFSP and then ESDP belongs to an intergovernmental pillar, which means that national sovereignty is still dominating in the field of CFSP/CSDP. ...read more.

An agreement on the ESDP will be more difficult to achieve. Therefore, it can be argued that the success of security and defence policy requires a more integrated planning process and structure in the EU. European Military Capability It is obvious that the creation of a European military capability is essential to a common European defence system. In December 1998, a meeting between the British Prime Minister Tony Blair and the French President Jaques Chirac in St. Malo declared the significance of a European military capability. The declaration said that: 'The European Union needs to be in a position to play its full role on the international stage. To this end, the Union must have the capacity for autonomous action, backed by credible, military forces, the means to decide to use them, and a readiness to do so, in order to respond to international crises, acting in conformity with our respective obligations to Nato' (quoted in Deighton, 2002). The 'Headline Goal' announced in December 1999 has designed the object of European military force, which is critical to the capability of the EU to carry out the 'Petersberg tasks' of 'humanitarian and rescue missions', 'peacekeeping', and tasks of 'combat forces in crisis management, including peacemaking'. Furthermore, a 'politico-military structure' has been established by creating a Political and Security Committee, a Military Committee and a Military Staff. 'These bodies were to work in conjunction with their NATO counterparts, developing modalities for the full consultation, co-operation and transparency between the EU and NATO' (Ginsberg, 2003). However, as has been identified by the EU itself, there is still a long way to go to supply the gap in its capabilities. According to Ginsberg, the 'shortfalls' in European military capability include 'command and control, air and sea lift, intelligence, precision guided airplanes, electronic warfare, logistics, combat support units, precision guided munitions, communications equipment and headquarters, suppression of enemy air defense, and combat search and rescue' (Ginsberg, 2003). ...read more.

At the EU level, the commission has acknowledged the special relationship between the EU and the US, as it claimed: 'the US is a major partner and the comprehensive relationship is particularly close on a range of issues stretching from trade and politics to foreign policy and security' (Commission, 2000:6). Therefore, an independent CESDP from Nato and/or the US seems still remote. In addition, as Nato has showed its powerful role in terms of 'mission expansion, enlargement, and cooperating with key non-EU states (Turkey, Russia)' (Smith, 2003) in recent years, the problem of dealing with the relationship with Nato/US is likely to be more critical to a further coherent CESDP. Conclusion 'The creation of the European security and defence policy (ESDP) has been called Europe's military revolution' (Andreani, 2001). However, the construction of a CESDP is slow and difficult. The first ESDP missions have been taken up by the EU in Bosnia and Macedonia in 2003, indicating a progress in the integration of security and defence policies. But there are still some obstacles and challenges to a coherent CESDP for the EU. The first is the tension of national sovereignty of national member states under the second pillar (intergovernmental pillar) of the EU structure, which makes any agreement in the area of security and defence under the bargaining among the 15 (or more in the future) member states. In addition, the current institutional arrangement about the role and responsibility of the Commission, the Council and the Parliament also impede to make the ESDP democratic, transparent and coherent. Secondly, there is also a lack of the political will and military capability to create a wide range of security and defence profile which is independent of Nato. Finally, in the term of the US role of the Atlantic Alliance or Nato, the EU is confronting how to reconcile a 'strategic and political Union' with a long-term alliance of Nato/US. ...read more.