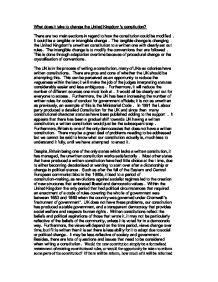 What does it take to change the United Kingdoms constitution?

What does it take to change the United Kingdom's constitution? There are two main sections in regard to how the constitution could be modified. It could be a tangible or intangible change. The tangible change is changing the United Kingdom's unwritten constitution to a written one with clearly set out rules. The intangible change is to modify the conventions that are followed. This is done through adaptation overtime because of procedural change or the crystallisation of conventions. The UK is in the process of writing a constitution, many of UKs ex colonies have written constitutions. There are pros and cons of whether the UK should be attempting this. This can be perceived as an opportunity to reduce the vagueness within the law; it will make the job of the judges interpreting statutes considerably easier and less ambiguous. Furthermore, it will reduce the number of different sources one must look at. It would all be clearly set out for everyone to access. Furthermore, the UK has been increasing the number of written rules for codes of conduct for government officials; it is not as unwritten as previously, an example of this is the Ministerial Code. ...read more.

Many of the principles about the constitution are very general and may easily conflict. As previously stated, most constitution-makers, do not therefore face the difficulty of selecting from a huge inheritance of existing laws, customs and conventions because they are trying to have a fresh start. Additionally, who is going to decide on what to include? The intangible change is in relation to conventions and their relationship with laws. If UK maintained their unwritten constitution, which is based on conventions, although there are increasing numbers of laws regulatory ministerial operations, one could alter the constitution through the 'crystallisation' of conventions overtime through judicial intervention and becoming increasingly formalised. However, some people argue that this is unfeasible, due to there being a strict distinctive difference between law and conventions. Albert Venn Dicey contends that constitutional "conventions were...a body not of laws, but of constitutional or political ethics...the constitutional morality of the day...not enforced or recognised by the courts..." Hood Phillips agrees that conventions are "...rules of political practice which are regarded as binding by those to whom they apply, but which are not laws as they are not enforced by the courts or by the Houses of Parliament." ...read more.

The view that courts do not "enforce" conventions, though adequate for some purposes, may frustrate constructive thought. Therefore, to change the constitution within the United Kingdom will take a significant amount of time, effort and resources. There is dispute about whether this should occur or not. Change may happen due to adaptation over time of the method or procedures the government operates with. Alternatively, it may occur due to the crystallisation of conventions into laws, having them becoming progressively formalised through judicial enforcement or just general public expectations. Both of these would occur naturally without any specific, or even intentional, intervention. Otherwise, it may be a more physical change by writing the constitution of the United Kingdom. This will give the opportunity to reform parts that are less desirable, as well as substituting the actual framework of the constitution. This would be the most effort, as it physically requires people with considerable constitutional knowledge to piece together all the information and decide what the UKs constitution should entail and which areas need improving. By creating a written constitution there will be a referable framework of that is easily accessible to everyone, it would reduce the number of sources required, as they would have already been interpreted into the constitution. Sources could be historical, judicial decisions, statutes, the unwritten constitution and amendments etc. ...read more.