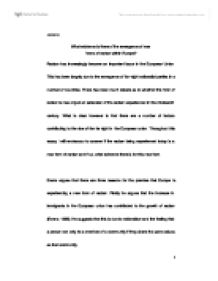 What evidence is there of the emergence of new forms of racism within Europe?

402166704 What evidence is there of the emergence of new forms of racism within Europe? Racism has increasingly become an important issue in the European Union. This has been largely due to the emergence of far-right nationalist parties in a number of countries. There has been much debate as to whether this form of racism is new or just an extension of the racism experienced in the nineteenth century. What is clear however is that there are a number of factors contributing to the rise of the far right in the European union. Throughout this essay I will endeavour to answer if the racism being experienced today is a new form of racism and if so, what evidence there is for this new form. Evans argues that there are three reasons for the premise that Europe is experiencing a new form of racism. Firstly he argues that the increase in immigrants in the European union has contributed to the growth of racism (Evens; 1996). He suggests that this is due to nationalism and the feeling that a person can only be a member of a community if they share the same values as that community. With the success of the far right in Germany, France and Italy, the issue of immigration within contempory political discourse has raised questions about the rights of citizenship, the nature of nationality and the viability of a multicultural society across the European union. ...read more.

Italy National alliance Northern League 16% 10% 1996 Norway Progress Party 15% 1997 Switzerland Swiss People's Party 23% 1999 This is clear evidence that the far right has been able to influence voters across Europe and bring issues such as immigration into the mainstream political agenda. Harris believes that success at the ballot box is dependent on a number of factors, such as the absence of an attractive alternative for the right wing and external circumstances of economic or political crises (Harris; 1994). The voters have not only been those of the centre right but also from the left, evidence of this came when Le Pen beat socialist Prime Minister Lional Jospin in the first round of the presidential elections of 2002. Anthias sights the demise of socialism, the failure of identity politics, the right wing backlash to policy and government initiatives and the fragmentation of social forces (Anthias; 1992) for the increase of votes to the far right. The far right instigated immigration debate with the help of increased media coverage, particularly in the newspapers, which has reported the increase of asylum seekers less then favourably (Evans). Far-right parties tend to be 'single- issue' and use the increase in immigration as a springboard for other issues such as the economy, law and order and welfare. The new form of racism is suggested to have formed in Britain in the period of the new right in the 1980's; this is because of the particular emphasis new right ideology had on national identity. ...read more.

European Union member states have recognised the persecution of the Roma with 7,000 being granted refugee status between 1990 and 1999. However it still remains a "major problem" amongst the future states of the European Union. As well as the Roma racism within Europe there still remains anti-Semitism, particularly in within the eastern bloc. Although the new anti-Semitism has a lot in common with that of the past (the anti-Semitism of Nazi Germany) it now consists because of new historical events. Since 1989 anti-Semitism has spawned due to the snail like pace of the economies of the former communist countries. Due to the economies of these countries not flourishing the Jews have been blamed (Evens; 1996). This is further evidence of a new form of racism as it has spawned on new historical events and proves that racism, as a phenomenon is not static. In conclusion there is clear evidence that there is new form of racism across Europe that has a clear focus on nationality and the protection of national borders. It is also clear that this new form of racism could have been produced in conjunction with the European Union. As I have explained racism is not a static phenomenon and has move historically which makes it harder to control as current events create racial fear and hatred, such as that of Islamaphobia through terrorism. The major factor for this new racism has been the increase in immigrants into Europe. However the new form of racism that the Europe is experiencing can be closely linked to the traditional racism. ...read more.