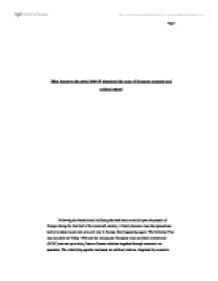 What factors in the period 1945-57 stimulated the cause of European economic and political union?

What factors in the period 1945-57 stimulated the cause of European economic and political union? Following the brutality and suffering that had been unveiled upon the people of Europe during the first half of the twentieth century, it finally became clear that procedures had to be taken to prevent any such war in Europe from happening again. The Schuman Plan was launched on 9 May 1950 and the consequent European Coal and Steel Community (ECSC) was set up to bring Franco-German relations together through economic co-operation. The underlying agenda was based on political motives, disguised by economic opportunity. It was believed that another war between the two great European powers could be prevented if their relations were strengthened; through economic integration. Furthermore, by the controlling of German coal and steel it would be impossible to create a war economy anyway. The development of the Schuman Plan came about during the early cold war period, when there was still a very big Communist threat. By uniting Europe this threat would be greatly reduced. During the time taken to finalise these proposals "the most violent opposition came from the Communists, who had been against any form of West European orgainization ever since the USSR had rejected the Marshall Plan"1. ...read more.

These institutions were independent and funded by their own tax from the coal and steel producers. This was vital in the promotion of both economic and political unification as it set the trend for future organisations, emphasising the essence of the community, striving for fairness, equality and freedom that could only be provided by an independent body. The High Authority's job was to be solely economic, ensuring the members of the ECSC exploited all potential economic advantages that the community presented. These included economies of scale, comparative advantage, freedom of moving produce and labour, modernisation of production, improved quality, price transparency, the harmonisation of workers rights and conditions, and the development of common exports. These objectives could not immediately be met as the members of the ECSC were all starting from different economic circumstance. It was thus proposed that transitional measures should be employed to compensate for the differences. This was an important test, as it would prove whether separate economies could merge, albeit in just one sector, and function in a way that was beneficial to all. If not, ideas of future economic and political unions would have been quickly thwarted. The success of the ECSC was therefore crucial in promoting the idea of unity in Europe as a viable vision. ...read more.

The political aims as shown by the principles were moral and long-sighted. This might explain why the Christian Democrats were particularly encouraged by it and why it took two years of discussion for the plans to materialise in the form of the ECSC. In conclusion, it is evident that the Schuman Plan, mastered by Jean Monnet, had unprecedented success, and laid the foundations where even greater unification of Europe could be built. Franco-German differences had been put aside through economic co-operation, and the joining of the Benelux countries and Italy only strengthened this. Squabbling over rich land such as the "Ruhr", which had caused so much confrontation pre 1945, soon became a mere memory. Indeed "the Ruhr, once the backbone of German industrial development, became its main problem"9 according to Laquer as the market for coal became smaller and smaller. The implementation of free trade became very important to the economic unification of the European states. It "eroded the market power of monopolies and cartels, forcing sheltered producers to shape up or lose market share to imports"10. The power of free trade became imperative to the making of the EEC. The Schuman Plan was such a success that "the six" went on to sign the Treaty of Rome to form the EEC, and since most of Europe have joined, (under the name of European Union (EU)). ...read more.