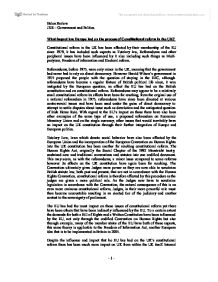 What impact has Europe had on the process of Constitutional reform in the UK?

What impact has Europe had on the process of Constitutional reform in the UK? Constitutional reform in the UK has been affected by their membership of the EU since 1979, it has included such aspects as Tutelary law, Referendums and other peripheral issues have been influenced by it also including such things as Multi-partyism, Freedom of information and Electoral reform. Referendums, before 1975, were only minor in the UK, meaning that the government had never had to rely on direct democracy. However Harold Wilson's government in 1975 proposed the people with the question of staying in the EEC, although referendums have become a regular feature of British political life since, it was instigated by the European question, an effect the EU has had on the British constitution and on constitutional reform. ...read more.

Tutelary Law, laws which denote social behavior have also been affected by the European Union and the incorporation of the European Convention on Human Rights into the UK constitution has been another far reaching constitutional reform. The Human Rights Act, originally the Social Chapter of the 1992 Maastricht treaty, enshrined new and traditional conventions and statutes into one codified document. This may seem, as with the referendums, a minor issue compared to some reforms however its effects on the UK constitution have again been far reaching. The Convention ultimately gives Judges more power as they are now able to scrutinize British statute law, both past and present, that are not in accordance with the Human Rights Convention, constitutional reform is therefore affected by this procedure as the judges are given a more political role. ...read more.

Despite the influence and impact that he EU has had on the UK's constitutional reform there has been much more impact on UK from within the UK itself. Internal pressures for reform gave come form various different sources, Robin Cook, for example demanded a referendum on Electoral reform, Charter 88 campaigns for a written constitution and the late Lord Hailsham's comments on "An elective dictatorship" in 1976 have influenced such aspects as Select committees and general government accountability. These examples subvert attention from Europe's influence on constitutional reform in the UK though it remains a powerful tool for such actions. WORD COUNT 649 ?? ?? ?? ?? Helen Barlow JXR - Government and Politics. - 1 - ...read more.