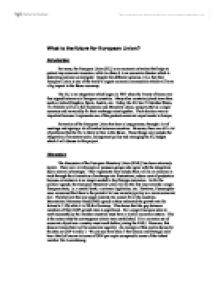 What is the future for European Union?

What is the future for European Union? Introduction For some, the European Union (EU) is an economic salvation that helps to protect any economic recession, while to others it is an economic disaster which is destroying national sovereignty. Despite the different opinions, it is a fact that European Union is one of the world's largest economic communities which will have a big impact in the future economy. The EU is an integration which began in 1951 when the Treaty of Rome was first signed between six European countries. Many other countries joined since then such as United Kingdom, Spain, Austria, etc. Today, the EU has 15 Member States, 11 of which will be in full Economic and Monetary Union, using EURO as a single currency and irrevocably fix their exchange rates together. Their decision was so important because it represents one of the greatest economic experiments in Europe. Formation of the European Union has been a long process, through a lot of meetings and signing a lot of treaties between countries. However, there are still a lot of problems that the EU is likely to face in the future. ...read more.

European Economy, No.65, 1998 There is a concern that some new entrants may have a very different economic structures and priorities to the existing EU members. Therefore, it has been predicted that it will be very difficult for EMU to succeed due to the diverse economies, different inflation, unemployment rates and economic growth. According to the supporters of EMU, the influence of the enlargement policy will lead to the formation of a larger regional economic association with up to 500 million consumers instead of the current 370 million. More consumers mean a better allocation of resources, take advantage of economies of scale and improve EU's competitiveness in world trade. The result is that there will be a better, stronger Europe. Nevertheless, there are some problems identified which associates with the enlargement policy. Firms may be attracted by the low labour and capital cost provided by Eastern Europe countries and therefore causes unemployment level in Western European to increase. Markets which are most at risk would be the ones where EU has traditionally imposed high tariffs to protect the domestic industries. Although there are a lot of potential future members of the EU from Eastern and Southern Europe, these countries have a low GNP and distribute a lot of money in the agricultural workforce. ...read more.

An appropriate policy is necessary to adjust and improve their own situation therefore it is hard to make all the members agree on a single policy that can satisfy all the member countries. Further investigations can be carried out by research different institutions responsible for the organization and enlargement of EU such as the Council of the EU, European Commission, European Central Bank, European Parliament, etc. This will allow a deeper insight into how the EU organizes and faces the existing problems which I have discussed in this report. Investigate each member country's EU department would also be a wise idea as it will allow us to view different perspectives, how they deal with situations, etc. Conclusion EMU is suggested to be an economic and political experiment. To decide whether a country should join EMU can be a complicated decision because it will base on a considerable amount of economic evidence, opinions, predictions and sources available at that time. In addition, the political factors must not be ignored as it is equally important, besides it is almost impossible to separate economic arguments from political. Surveys, research of arguments and opinions are necessary to analyse whether EMU membership will be favourable for the economy. Careful considerations are required as it will affect the whole country and its economy. ...read more.