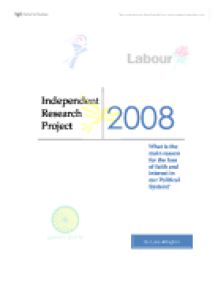 What is the main reason for the loss of faith and interest in our Political System?

Independent Research Project 2008 What is the main reason for the loss of faith and interest in our Political System? Title: Sub-title: Page: Acknowledgments - 1 Executive Summary - 1 Introduction Introduction Aim Hypothesis Methods 2 2 2 2-3 Development How do people gain knowledge about politics? Should Government and Politics be a mandatory subject in the Curriculum? The Tabloids The Broadsheets Television Is the negative media justified, and is it doing a good job? What other issues may affect the loss of faith? How do the negative factors mentioned affect politics? 3-4 4-5 5 5-6 6 6-8 8-9 9-11 Primary Data Research - Results Tables of results Representation and evaluation of data Recommendations 11 12 12-14 14-16 16-17 Conclusions and Evaluations Evaluation of primary research Conclusions drawn from the investigation 17-18 18-19 Bibliography and References - 20 Appendices Sample questionnaire 21 Acknowledgments: I want to take this opportunity to thank those who helped me to create this piece of work, and those who gave me the encouragement to carry on when I thought it had me beat. Thanks to those who completed questionnaires which made it possible for me to gain primary data, and gave me a lot of 'food for thought' during the investigation. I'd like to Acknowledge the great support given by the Aylesbury College, not just throughout this project, but throughout the whole year, without the support from the staff, both the Tutors, and administration assistants, I would not be on the verge of becoming a 'tax-dodging University student'. I wish to show gratitude to my Father who introduced me to Radio 4, which was broadcasting at the right place, at the right time, and really helped to give me inspiration on this piece of work. My Mother must receive praise for constantly reminding about 'keeping up with the work', and also for keeping me well fed and watered throughout. ...read more.

of the 'organic' constitution that we live by, are not always seen to be answers to the very troubles that the government set out to achieve in the first place. 6 Radio 4 interviewed Harriet Harman, Leader of the House of Commons, on Friday the 28th March 2008, after she recently put an idea forward that would try to combat this topic of concern, post legislative scrutiny, suggesting that the department responsible for the legislation in the outset were then appointed to look back at legislation which had been passed three to five years previously, create a memorandum, and to make checks on whether it was working in the was that parliament had intended, checking any negative points about them, and gaining positive results if possible to silence any criticisms that may have been brought to light since the laws had been made operational. She recognises that the public are getting tired of the amount of new laws which don't seem to be working in the way that they should and has designed this plan of action to remedy this. However there were two quite valid points raised in the interview which forced some interesting answers. The first was that the re-raising the issues of the original cause of concern might spark up the emotions and debate that were prominent when the act was passed, the interviewer used the example of fox-hunting, which was banned in 2003, to which the deputy leader of the labour party responded by assuring that this idea of scrutinising the acts was not to revive the original debate or to discovers whether the act was right or wrong, but to check whether or not it has remedied the issues which it was designed to resolve. The next point that she was questioned about was the ability of the select committees who will have to look at all the old legislations and memorandums produced by the relevant departments, as well as trying to keep up with all the new legislation thrown at them, basically asking whether she thinks that they have time to do everything twice. ...read more.

Earlier on in the investigation I suggested that government and politics should be a mandatory subject in the school curriculum, however after some further research I have found that there are in fact plans to introduce the subject of citizenship, which is not pure politics, but a step in the right direction. I remain a firm believer in the idea to teach students at a younger age about politics and the way that the country is controlled, however arguments that the children have to be a certain age because otherwise they will find it boring and not participate seem to prevail. During the investigation I also looked into some other factors which may affect the low turnouts of general elections, and voter apathy, but one that I did not mention is the voting system itself. Again after some further reading I realise that another aspect that I had overlooked in my investigation, and also my questionnaire was the idea that the voting system may simply be too old, and is perhaps in need of radical improvement and dragging into the 21st century. Many people believe that the introduction of internet voting would be a way to contest voter apathy, and that having to leave the comfort of your own home, sometimes in the rain, to find the voting stations should be a thing of the past, however government officials believe that the traditional voting method should remain, and that the ever increasing amount of internet hacking and fraud which is committed everyday, renders the internet too insecure to entrust the redistribution of power to. In conclusion I think that there are many important factors that need to be addressed in order to increase the turnouts of elections, and to restore faith in British politics, including the voting system, better education, and possibly better restraints on the legislation that is passed, however I still believe that if politicians are allowed to remain unpunished for scandalous behaviour and take advantage of the people who pay both their wages, and expenses, the faith in our so called democracy will never be restored. ...read more.