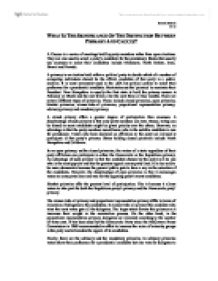 What is the significance of the distinction between primary and Caucus?

WHAT IS THE SIGNIFICANCE OF THE DISTINCTION BETWEEN PRIMARY AND CAUCUS? A Caucus is a series of meetings held by party members rather than open elections. They are also used to select a party's candidate for the presidency. States that usually use caucuses to select their candidates include Minnesota, North Dakota, Iowa, Hawaii and Nevada. A primary is an election held within a political party to decide which of a number of competing individuals should be the official candidate of that party in a public election. It is most commonly used in the USA by political parties to select their preference for a presidential candidate. Most states use the 'primary' to nominate their President. New Hampshire is usually the first state to hold the primary season in February or March and the rest follow over the next three or four months. There are several different types of primaries. ...read more.

It is also said to be more democratic because the general public gets to have a say in the selection of the candidates. However, the disadvantage of open primaries is that it encourages voters to cross party lines and vote for the opposing party's worst candidates. Blanket primaries offer the greatest level of participation. This is because it allows voters to take part for both the Republican party's primary and the Democratic party' primary. The winner-take-all primary and proportional representation primary differ in terms of allocation of delegates to the candidates. In winner-take-all primary the candidate who wins the most votes gets all the delegates. The larger states favour this primary as it increases their weight in the nomination process. On the other hand, in the proportional representation primary, delegates are allocated according to the number of votes cast. It has been used by the Democratic Party since the McGovern Fraser Commission in 1969 recommended an effort to increase the voice of minority groups in the party and to broaden the appeal of its candidates. ...read more.

Thirdly, it is claimed that the primary season weakens parties. This is because it removes the parties' ability to nominate their own candidate by putting the power in the hands of the public. It also encourages the creation of personal campaign organisations built around the candidates rather than the party. This usually leads to public disunity. Finally, it is said that it leads to low voter turn out. It tends to be confined to the stronger party identifiers. For e.g. in 1998 only 16.86% of those eligible voted. There has been a process of steady decline in voter turnout since 1970. Turnout is usually higher for Democratic Party. Hence, a Republican candidate could win with less than 5% of the eligible vote. This can be improved by introducing electronic and postal votes. Hence, to sum up it can be said that the caucus and the primary season are an essential parting of the election season in the USA. Javeria Masud 13 O ...read more.