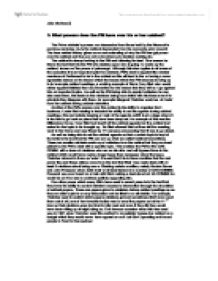 What powers does the PM have over his or her cabinet?

1: What powers does the PM have over his or her cabinet? The Prime minister's powers are descended from those held by the Monarch in previous centuries. As is the cabinet descended from the monarchs privy council. The twos related history gives us an understanding of why the PM has got power over the cabinet and they are not on level terms in decision making etc, The cabinet is always looking to the PM and following his lead. One reason for this is the fact that it is the PM who decides upon who is going to make up the cabinet, known as 'the power of patronage'. Although this also applies to all areas of the executive it is an important point for cabinets. PM's tend to appoint like minded members of Parliament to be in the cabinet as this will lead to them having a more agreeable stance on the issues which the issues which the PM chooses to bring up in for example cabinet meetings, a working example of this is Tony Blair who would rather appoint Blairites than say Brownites for the reason that they will not go against him on important topics. As well as the PM being able to appoint ministers he can also sack them, this leads to the ministers being more inline with ...read more.

2: What are the main threats to collective cabinet responsibility? Collective cabinet responsibility is the guiding principle of the UK cabinet; it means that if the Govt. comes out with a policy then the whole cabinet must publicly support it, if they agree with it or not. If they choose to speak out about it then they must resign from the cabinet. The main threat to this is the fact that PM's recently have been making decisions with an unelected group of advisors known as the Downing Street Staff. This decisions could really go against what the actual cabinet feel about the subject, there was a clear example of this recently when Jack Straw had to go on camera and say that it was a good idea to go to war with Iraq, even though according to reports he had spoken to Blair the night before telling him that he thought that we should not go to war. Many feel he only did this to keep his job on the cabinet. Others did not agree and decided to walk out, such as Robin Cook. Another threat is that ministers may realise that they cannot speak out about the PM and so they 'leak' documents to the press which state that for example a certain minister feels this way on a topic. ...read more.

This tied his hands as PM which is partially why his party was seen as weak, as he himself was constantly against half of his party. In Blair's case he has been able to lead his part due to the fact that they are largely together. When a PM has the ability to lead his party he has the option of switching to the core executive method of decision making. He has surrounded himself with many bodies to broaden his powers. He surrounds himself with such bodies as Think Tanks and the Downing Street Staff who create policies and advise him, rather than the cabinet. Blair also has to listen to such people as Gordon Brown as they have apparently made a deal together as they are two big guns within the party. So it is true to say that cabinet govt has been replaced by the core executive but this is not new to British politics. The main factor in deciding which method is used is largely down to the PM's personality and circumstances as leader. But on a whole many PM's do use some or all of the bodies involved in the core executive method, but the more used the more obvious it is, I think the more bodies used to make decision by the PM the more power he himself loses as he has less personal control over what is happening within each body. John McDonald ...read more.