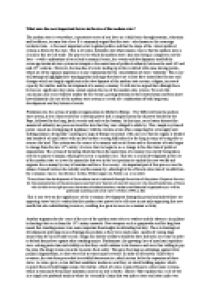 What were the most important factors in the rise of the modern state?

Transfer-Encoding: chunked ﻿What were the most important factors in the rise of the modern state? The modern state is everywhere; it penetrates areas of our lives on a daily basis through taxation, education and healthcare, to name but a few. It?s commonly argued that the state ? also known as the sovereign territorial state - is the most important actor in global politics and that the shape of the current political system is driven by the state. This is of course debatable, but what remains clear is that the modern state is crucial to this area of study. The process by which the modern state came into being is complex to say the least - a wide combination of social and economic factors, key events and developments enabled the sovereign territorial state system to triumph as the main form of political authority between the mid-16th and mid-18th centuries. However, the timeline of events leading up to this is dotted with some turning points, which are of the upmost importance in any explanation for the consolidation of states? authority. This essay will attempt to highlight these turning points and argue that there are at least three interrelated factors and changes which are hugely significant in the development of the modern state system: religion, increased capacity for warfare and the development of a money economy. ...read more.

the 18th century ? the nobility still maintained a strong influence, taking up many of the prominent administrative positions and military roles. In addition to a persistent aristocracy, other forms of political organisation like city leagues, city-states and universal empires were all strong alternatives that threatened the consolidation of the sovereign territorial state. Hendrik Spruyt looks at the reasons why the sovereign territorial state was able to triumph over these alternative vessels of political authority in his book The Sovereign Territorial State and Its Competitors. One of the examples he uses for his analysis is the Hansa (The Hanseatic League), which was an alliance of merchants spanning across Northern Europe, comprising of around 200 cities. They were a force to be reckoned with from the 14th to the 16th century and a driver of economic progress with armed forces and a legal framework. The Hansa were eventually overpowered by it?s rivals which came in the form of territorial states and Spruyt equates this to various factors but he essentially argues that the sovereign territorial state prevailed because it was better at centralising jurisdiction and authority and thus in a better position to prevent free riding and gradually rationalise their economies. ...read more.

We?ve also seen how this economic change enabled states to engage more effectively in warfare. The process of extracting revenue and re-distributing resources forced the state to develop bureaucracies which not only enabled them to wage more wars but also to further cement and centralise their sovereign territorial authority, giving them the upper hand against rival forms of political organisation like city states and city leagues. It would be a gross oversimplification to try and pinpoint the development of the modern state to an individual cause. It took centuries for the map of Europe to even begin to resemble what it did by the 18th century and this was in no way a smooth or linear process. Referencing Diamond, J. M. (1999). Guns, germs, and steel: the fates of human societies. New York, Norton. Weber, M. (1948) Politics as a vocation. In: From Max Weber: essays in sociology. London: Routledge and Kegan Paul. Tilly, C., Evans, P.B., Rueschemeyer, D. and Skocpol, T., (1985). War making and state making as organized crime (pp. 169-191). Cambridge: Cambridge University Press. Hirst, Paul (1997). ?The International Origins of National Sovereignty?. In Politics and the ends of identity; edited by Kathryn Dean. Aldershot: Ashgate Publishing Ltd. pp 265-287 ...read more.