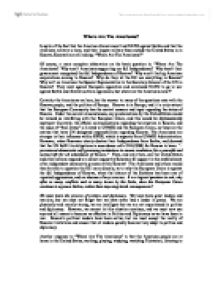 Where Are The Americans?

Where Are The Americans? In spite of the fact that the American Government Led NATO against Serbia and that the American military is here, and their largest military base outside the United States is in Kosova, Kosovars are still asking: "Where Are The Americans?" Of course, a more complete elaboration on the basic question is: "Where Are The Americans? Why aren't Americans supporting our full Independence? Why hasn't their government recognized the full Independence of Kosova? Why aren't the big American corporations coming to Kosova? Why do they let the EU run everything in Kosova? Why isn't an American the Special Representative to the Secretary-General of the UN in Kosova? They went against European opposition and convinced NATO to go to war against Serbia and liberate us from oppression, but where are the Americans now?" Certainly the Americans are here, but the answer to many of the questions rests with the Kosova people, and the politics of Europe. Kosova is in Europe, and it is only natural that the European Community has the central concern and input regarding the status of Kosova. ...read more.

Kosova's political leaders have been active, but we must accept the reality of Kosovar limitations and ensure that all leaders quickly become truly adept in politics and diplomacy. Another response to "Where Are The Americans" is that the American people are at home in the United States, working, playing, studying, watching Television, listening to the radio, reading newspapers; and all of these things are being done in English. It is true that there are a few thousand Americans who speak Albanian, but how many are in positions of authority and how many are actually doing anything effective to bring the "message" the "truth" about Kosova to the American people? How can the average American care about Kosova, if they know nothing about Kosova? Americans are paying close attention to world events, such as the terror threats and the issue with Iraq, and they are paying attention because they are being communicated to in English. Why should American journalists pay attention to Kosova when anything of importance has to be translated from Albanian to English by them? We speak out, and demonstrate, but nothing is said or written in English. ...read more.

In the eyes and minds of Americans, it appears that "everything is OK" in Kosova, and they believe that if everything is going well, why should Americans continue to support the American Military being in Kosova? Americans believe: If "everything is OK," let Europe bear the costs of taking care of Kosova and we can move our troops to where they are needed! American politicians respond to the will of the American people, and Kosova politicians and the Kosovar people need to recognize this fact and reach out to the Heart of the United States, the American people! We must have the courage to make strong and timely Diplomatic moves, such as the publicly restating our Independence, and request direct assistance from particular nations in order to counter the current negative intent and actions of the European Union and Serbia to keep us within and under Serbian Dominance. We Kosovars need to "wake up, and stand up" and speak out, in a loud, firm, clear and unified English Speaking voice, against the effective Serbian Propaganda, The Manipulation of The Hague, and the Appeasement efforts of the European Union. They are making their propaganda in English, and it must be countered in English! We Have Everything To Lose, And Everything To Gain. ...read more.