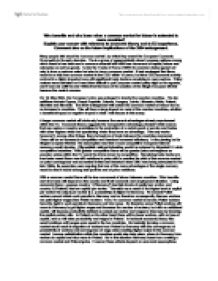 Who benefits and who loses when a common market for labour is extended to more countries? Explain your answer with reference to economic theory and to EU experience. Comment also on the future implications of the 2004 enlargement.

Who benefits and who loses when a common market for labour is extended to more countries? Explain your answer with reference to economic theory and to EU experience. Comment also on the future implications of the 2004 enlargement. Many people talk about the 'common market', by which they meant the European Economic Community in its early decades. Ths is a group of geographically close European nations among which there is free trade and a common external tariff with free movement of capital, labour and enterprise as well as goods. Under the Treaty of Rome (1957) the member states agreed not only to form a customs union but also to form a common market. It had envisaged that there would be a fully free common market in the EEC within 12 years, but intra EEC economic activity evolved in a highly imperfect way with significant trade barriers remaining in many sectors. Policy makers were fustrated for it was often difficult to put European market policy high on the agenda, and it was not untill the mid 1980s that the issue of the creation of the Single European Market became the central concern. ...read more.

So basically forming a common market would result in migration of workers from Poland to Germany with the convergence of productivity of workers and convergence of wage rates creating higher output in the common market. Income redistribution within the countries would also take place, where in Germany from workers to capital and vice versa in Poland. So in this situation Germany loses from creating a common market and Poland gains. However these effects depend on economic assumptions made such as full employment and wage flexibility. Also wage differentials arise from differences in the capital-labour ratio and not differences in skills. There is no need for migration to get equal wages, 'free trade' (as in the CU) could bring this about under certain conditions. If Poland specialises in exporting goods which require much labour in their production this increases the demand or labour in Poland and wages increase. There would be the opposite trend in Germany which specialises in goods which need little labour. The free movement of capital without free movement of labour could also equalise wage rates. This would all result in firms relocating from areas with high wage rates to areas with low wage rates. ...read more.

may be at the expense of stronger integration between members (deepening of the EU). Deepening might be the issue which attracts new members (prospect of more help) while widening may be an incentive for some major reforms (e.g. CAP) because of future unacceptable cost burdens. In terms of cost and CAP, one scenario estimate is an extra 2bn ECU needed to subsidise farmers facing lower prices from the CEEC economies. Another scenario is if financial support was not given to maintain prices then farmers would lose 3.7bn ECU. Both taxpayers and consumers could benefit. There will also be a large increase in spending on structural and cohesion funds which include various funds such as Regional and Social Funds. This could raise by an extra 42bn ECU. However many believe this figure is too high because these countries would not be able to absorb such high levels of spending. All-in-all, Baldwin places the net cost of enlargement at 19bn ECU (per year) or about 20% of the EU budget. However, the Agenda 2000 proposals are less generous stating 11bn (per year). Gradualism is the key theme and it is very difficult to quantify long term impacts. Overall the EU enlaregment has occured and only time will tell if it was a wise and successull move for all involved. ...read more.