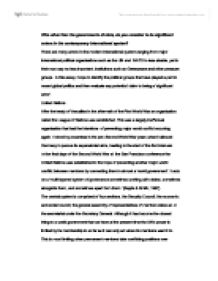 Who other than the governments of state, do you consider to be significant actors in the contemporary international system?

Who other than the governments of state, do you consider to be significant actors in the contemporary international system? There are many actors in the modern international system ranging from major international political organisations such as the UN and NATO to less sizable, yet in their own way no less important, institutions such as Greenpeace and other pressure groups. In this essay I hope to identify the political groups that have played a part in recent global politics and then evaluate any potential claim to being a 'significant actor'. United Nations After the treaty of Versailles in the aftermath of the First World War an organisation called the League of Nations was established. This was a largely ineffectual organisation that had the intentions of preventing major world conflict occurring again. It stood by powerless in the pre-Second World War years when it allowed Germany to pursue its expansionist aims, leading to the start of the first total war. In the final days of the Second World War at the San Francisco conference the United Nations was established in the hope of preventing another major world conflict between members by connecting them in almost a 'world government'. It acts on a 'multi-layered system of governance sometimes working with states, sometimes alongside them, and sometimes apart form them.' ...read more.

(Heywood, 2002). The level of economic, political and now with the introduction of the single European currency, monetary union that is present within the EU results in one of the, if not the, most important bodies in the international system. The laws passed in the European Court of Justice override any laws in the member countries and the ECB (European Central Bank) makes decisions regarding interest rates that directly affect every member state of the single currency. Both of these elements show that unlike the UN, the EU can act independently of its member states, demonstrating greater decision-making power due to the lack of constrictions in place. The greater assertiveness on the world stage, embodied by the creation of a European rapid reaction force, is even threatening to 'lead to a realignment in its relations with other major powers' (Heywood, 2002) on the world stage. NATO NATO or the North Atlantic Treaty Organisation is an intergovernmental body that was formed in April 1949 when eleven European countries joined with the US to create a military alliance. The North Atlantic Treaty basically states that if any of the member countries who at this present time are Belgium, Canada, Czech Republic, Denmark, France, Germany, Greece, Hungary, Iceland, Italy, Luxembourg, Netherlands, Norway, Poland, Portugal, Spain, Turkey, UK and the US are attacked then all of the members would respond to the attack together. ...read more.

These groups are often dismissed as a nuisance but serve many important roles in society. In the case of promotional groups they serve to promote an idea to people and the political authorities in the hope that they can influence policy and implement changes. An example of such a group would be Greenpeace or Friends of the Earth. These groups generally don't ally themselves with any political parties for fear of being shunned by the others and therefore can attempt to influence far more people. They tend to be quite influential with the previous examples having millions of members worldwide and playing large parts in bringing about important issues that governments would choose to ignore. They also provide governments with a means with which to test prospective ideas or policy changes. Protectionist groups have much more power compared with promotional groups however. Protectionist groups, one's that represent their members i.e. trade unions, generally have powerful sanctions that they can implement to directly influence the mood of the public or to get themselves noticed, as is currently being demonstrated by the fire fighters strike. Because these groups normally represent valued sections of society their influence is large and can result in a shift in public opinion, which is more often than not followed by government action. While these groups are more powerful than promotional groups, they don't tend to represent international membership though. Because of this they cannot really be considered a significant factor in the current international system. ...read more.