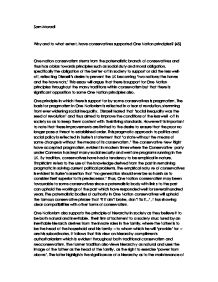 Why and to what extent, have conservatives supported One Nation principles?

Sam Moradi Why and to what extent, have conservatives supported One Nation principles? [45] One nation conservatism stems from the paternalistic branch of conservatives and thus has a bias towards principles such as social duty and moral obligation, specifically the obligation of the better-off in society to support or aid the less well-off, reflecting Disraeli's desire to prevent the UK becoming 'two nations; the haves and the have nots.' This essay will argue that there is support for One Nation principles throughout the many traditions within conservatism but that there is significant opposition to some One Nation principles also. One principle in which there is support for by some conservatives is pragmatism. The basis for pragmatism in One Nationism is reflected in a fear of revolution, stemming from ever widening social inequality. Disraeli feared that 'social inequality was the seed of revolution' and thus aimed to improve the conditions of the less well-off in society so as to keep them content with their living standards. ...read more.

It follows that this view on hierarchy compliments authoritarianism which is evident throughout both traditional conservatism and neoconservatism. The former tradition also views hierarchy as natural and uses the image of the father as the head of the family, as the right to exercise 'power from above'. The latter highlights the significance of a hierarchy as to the maintenance of security, such as that 'knowing where you stand' in society, or in a social group. They believe that this security is provided by the father of the family via means of strong paternalistic curtailment of liberty. As this view of hierarchy leads itself to authoritarian views, Libertarians strongly disagree with the principle. They believe that government should have the least possible regulation on social life. Thus they view the positive curtailment of liberty to be a violation and believe that negative liberty has priority over all forms of authority, tradition and equality. From the view that the father is the provider in a family, One Nationism has constructed its approach to social policy. ...read more.

This is somewhat supported by Christian conservatives who aim to help the 'needy' in society. There is also further support of 'compassionate conservativism' since the 1980s and a shift away from market fundamentalism. However there is further disagreement with neoliberalism as they disagree in state intervention in social or economic policy and are not attuned to the view of the deserving poor. In conclusion, it is evident that there is agreement between conservatism and One Nation principles on matters such as hierarchy but the extent to which depends on how the view is portrayed. Different traditions view the principles in different lights and thus have different outcomes regarding the principle. It is also evident that One Nationism shares many similarities with the conservative New Right but finds itself largely at opposition with neoliberal viewpoints. Thus, One Nation conservatism has tended to find support due to its emphasis on empiricism, natural inequality, tradition and the organic society. The overall conservative support towards One Nation notions is to a large throughout traditional forms, and is limited when theories of neoliberalism develop. ...read more.