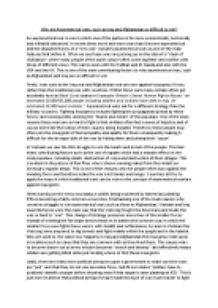 Why are Asymmetrical wars, such as Iraq and Afghanistan so difficult to win?

﻿Why are Asymmetrical wars, such as Iraq and Afghanistan so difficult to win? An asymmetrical war is one in which one of the parties is far more economically, technically and militarily advanced. In recent times more and more wars have become asymmetrical and the disputed theory of a ?new war? includes asymmetrical wars as one of the main features that define it. Often we see these wars are picking up on the idea of a ?clash of civilisation? where many people of the same culture often come together and conflict with those of different views. This can be seen with the Taliban and Al Qaeda and also with the USA and the UK. This is one of the main contributing factors to why asymmetrical wars, such as Afghanistan and Iraq are so difficult to win. Firstly, wars such as the Iraq war and Afghanistan war are now against insurgency forces, rather than the traditional war with countries. ...read more.

This had many contributing factors such as the use of napalm which had a massive effect on the local populace, including death, destruction of crops and destruction of their villages. This is evident in the picture of Kim Phuc who is shown running naked from the violent un-necessary napalm attack. This is one of the reasons why the people often turn against the invading force and therefore make the war a lot harder and longer. Countries still try to apply the ways in which traditional wars can be won to the concept of asymmetrical warfare against insurgents. When turning on the news nowadays a soldier being murdered by extremists planting IEDs is becoming a fairly common occurrence. Emphasising one of the main reasons why countries struggle to win asymmetrical wars such as those in Afghanistan, Vietnam and Iraq. Guerrilla forces were the main way that the Vietcong fought the Americans and made the war so hard to ?win?. ...read more.

Jodi Brown states ?soldiers have to positively identify a target before shooting even if that target is seen planting an IED.? This is just more evidence that political pressures have made this type of war much harder to fight and win. Also, countries cannot use a lot of the weapons available to them in their armory as they as deemed to use excessive force these include weapons such as nuclear weapons and even airstrikes are very rarely used now. In conclusion we can see that there are many reasons and factors, why asymmetrical warfare has become so hard to fight. The main contributing factor would be the fact that, unlike previous wars, countries are not fighting a certain country in an ?old war? type style. However, the soldiers are fighting a ?new war? where they fight groups of insurgents. For this requires different tactics which mean that winning the ?hearts and minds? has become more important that killing the groups and therefore the wars take longer to win for a generally better long term outcome. ...read more.