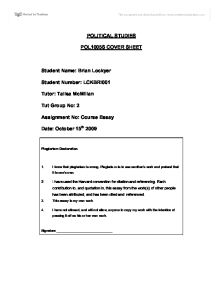 Why are developing countries unhappy with the global arrangements under the Bretton Woods system?

POLITICAL STUDIES POL1005S COVER SHEET Student Name: Brian Lockyer Student Number: LCKBRI001 Tutor: Talisa McMillan Tut Group No: 2 Assignment No: Course Essay Date: October 15th 2009 Plagiarism Declaration 1. I know that plagiarism is wrong. Plagiarism is to use another's work and pretend that it is one's own. 2. I have used the Harvard convention for citation and referencing. Each contribution to, and quotation in, this essay from the work(s) of other people has been attributed, and has been cited and referenced. 3. This essay is my own work. 4. I have not allowed, and will not allow, anyone to copy my work with the intention of passing it off as his or her own work. Signature ______________________________ Why are developing countries unhappy with the global arrangements under the Bretton Woods system? The Bretton Woods system was formed after the First World War in order to establish new institutions and rules to manage international trade and monetary relations (Cohn, 2003:158). The Bretton Woods system was devised around liberalist principles that emphasize free trade, monetary stability as well as open and liberalised markets, these ideas were perceived to be necessities in order to bring about global economic growth and stability throughout the world. The United States, at the end of the second World War was the dominant world superpower and played a critical role in the establishment of the Bretton Woods system, the main proposals as proposed by the Bretton Woods system revolved around preventing another reoccurrence of ...read more.

In response to the growing debt and economic morass throughout Africa, the IMF and World Bank set about implementing Structural adjustment programmes (SAPs) which were concerned with promoting economic self-sufficiency and sustainability amongst African countries through the stimulation of exports, the encouragement of private development and the promotion of economic diversification. (Appiagyei-Atua, 2006:539). The IMF and World Bank have been heavily criticized for their neo-liberalist approach to solving Africa's developmental problems, their policies emphasize the minimization of the state in all forms of economic and social development thus allowing the private sector and the markets to flourish and facilitate the onset of sustainable economic growth (Lesfudi, 2004:812). In short, throughout most of the developing world the fiscal institutions of the Bretton Woods agreement have not succeeded in bringing about economic development which have been attributed to their neo-liberalist and classical economic approach to development as well as the emphasis placed on the private sector and markets in order to bring about economic development which has failed miserably. Critics have identified the need for a revamp in policy, one that is completely citizen centric in order to improve the perilous situation throughout Africa. The implementation of the Structural adjustment programmes (SAP's) that were developed by the IMF and World Bank have caused much debate due to the disastrous effects that the SAP's have had throughout Africa (Maloka, 2004:4). SAP's were subjected to fierce scrutiny due to their neo-liberalist ideologies. ...read more.

However, the neo-liberalist policies implemented by such organisations have had adverse effects on the development of many African states and have paved the way for the onset of many issues that have further impeded and stagnated potential economic growth throughout the continent (Maloka, 2004:4). Neo-liberalist policies have also been blamed for the continuing gap forming between the rich and poor, which can be seen by examining the policies imposed by the IMF and the World Bank which only succeeded in increasing debt and averting growth (Maloka, 2004:4). The global trading system governed by the WTO is indicative of the hardships and injustices that the developing world is constantly exposed to. Agricultural protectionism and the imposition of subsidies on African products are severely hindering the ability of developing nations in competing in world markets and therefore reducing the chances for economic growth and prosperity. For too long the developing world has been subjected to the harsh and unjust conditions of the global system, there is a need for liberalization and the implementation of free trade routes without barriers in order to sufficiently improve the situations in the developing world. There is a great need for investment and the opening of global trade markets to entice investment and therefore encourage the much needed economic growth. The strict implementation of regulations is a necessity in policing the detrimental effects that globalisation is having on the developing world. ...read more.