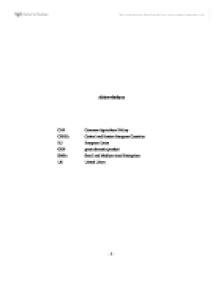 Why are Member States of the EU so positive towards an enlargement of the EU to Central and Eastern Europe ?

Abbreviations CAP Common Agricultural Policy CEECs Central and Eastern European Countries EU European Union GDP gross domestic product SMEs Small and Medium-sized Enterprises UK United Union Why are Member States of the EU so positive towards an enlargement of the EU to Central and Eastern Europe ? Introduction. Each countries of the European Union has its own opinion towards the enlargement. The EU has its opinion, but after each Member State has its personal point of view concerning the enlargement of the European Union. Moreover each Member State has its own foreign policy towards the Central and Eastern European Countries (CEEC), and they have some particular relationship with each of them. Basically, as Steven P.McGiffen says that external relation between a Member State and the applicant countries is generally determined by geographical proximity. For example Germany tends to be interested in the accession of its immediate neighbours : Poland, Czech Republic, Slovakia and Hungary. There is also the importance of History. In fact through decades, Europeans' countries have created relations between each over, in particular during the World War Two and since the end of the Cold War. ...read more.

It will bring positive economic effects. In fact, in recent years their immediate neighbours to the east, Poland, the Czech Republic, and Hungary have become important trading partners for Germany. Growth in trade with the Central and Eastern European countries has been above average. This trend is expected to continue. The German government predicts that as a result of the accession of these countries GDP in Germany will grow by around 0.5%. In 1998 Germany's trade volume with the acceding countries amounted to around DM 142 billion. For Germany the volume of trade with the Central and Eastern European countries is greater than with the United States and Canada put together. Between 1997 and 1998 German exports to Central and Eastern Europe rose by 19% (three time more than overall growth in exports). This trend is likely to continue because most acceding countries are growth markets. As a country oriented towards foreign trade, Germany has a fundamental economic interest in rapid enlargement of the EU. Enlargement will make it possible to development wide-ranging economic ties with the neighbouring Eastern European countries. In 2000, sales from Germany to the 10 CEECs increased by 21.8% to more than 91.5 billion euro. ...read more.

Agricultural Policy needed to allow the adhesion of Central European states to the EU is not likely to be easily accepted by French farmers. Many French, who are still traditionally 'integrationist' and committed to the European Union, see enlargement as a danger, because of the strain it could put on EU institutions. In fact, French government thinks that it is more important to reform the institution before any enlargement. We can say that the French president Jacques Chirac seems to be interested in the enlargement, but the rest of the government is not very for. Some French, fearful of German power, consider that Central Europe is very much a German sphere of economic, cultural and political influence and that enlargement could as a consequence reinforce Germany and destabilise the 'Franco-German motor'. Conclusion. As we have seen, Member States have different point of view towards the enlargement. It depends which relations have the member with the candidates' countries. But in general we can say that Member States are positive. Enlargement will bring lots of benefits to a major part of the Members States. During this essay, we have considered the point of view of the Member States, but it is the European Union which is going to be enlarged. ...read more.