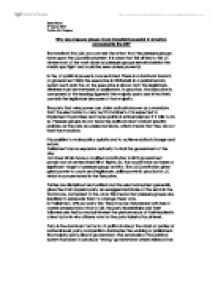 Why are pressure groups more important powerful in America compared to the UK?

Why are pressure groups more important powerful in America compared to the UK? The Media in the USA you can see the effect that the pressure groups have upon the US political system, it is clear that this differs to the UK where most of the work done by pressure groups remains behind the media spot light and could be seen as less powerful. In the UK political power is concentrated. There is a dominant branch of government this is the executive in Whitehall. In a parliamentary system such as in the UK the executive is drawn from the legislature. Ministers must be members of parliament. In practice, the executive is composed of the leading figures in the majority party and effectively controls the legislature because of that majority. The party that wins power can claim authority known as a mandate from the electorate to carry out its manifesto. It is expected to implement its promises and faces political embarrassment if it fails to do so. ...read more.

Party is the dominant factor in UK politics is about the clash of parties at national level, party competition dominates the working of parliament. The majority party directs government. The emphasis of the political system has been to produce 'strong' governments where reliance has been placed more on the ultimate political control, i.e. the need to win general elections. The distinction between political parties and pressure groups has become blurred. Today many groups endorse candidates for office, raising campaign funds, provide workers, pay for television advertising and generally help out at election time. For example, in 1988, the Liberty Federation provided campaign funds and television advertising for both George Bush and conservative Republican Congressional candidates. Funding of candidates by PACs means pressure groups can sponsor campaigns and political advertising for example pro and anti-abortion. Think tanks started in US such as Brookings Institute or Heritage Institute In UK however, many of same groups and types of pressure groups operate e.g. professional like American Medical Association or BMA in UK;, manufacturing industry, large companies such as Union Carbide or General Motors or oil companies like BP - refer to our visiting speaker John O'Reilly from BP Public Affairs Dept, who has lived in London, Washington and Alaska. ...read more.

In the US there is a Federal system this means pressure groups can operate at several levels and access points e.g. states, executive, legislature, judiciary. Political power more spread out in the US, separation of powers, so all the above are targets for lobbyists. E.g. BP Britain is more homogeneous than the USA, and has fewer regional, racial and religious differences. Religion tends to be a question of personal conscience and the political questions about the role of state and church are of little interest to the most unreligious population in Europe. So there are fewer pressure groups on this matter and perhaps feelings are less strong in the UK than in the US in this matter Key difference is different structure of government, then number of access points. In UK mainly executive, both civil service and Ministers who are supposed to make decisions. This reflects the concentration or fusion of powers in the UK. In US federal system shown by importance of state governments at all levels. The weakness of parties is also clear in US less point in lobbying central party orgs, but much point in financing and supporting individual candidates. Katie Shield 6th March 2009 Politics Mr. Gregory. ...read more.