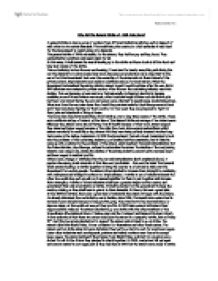 Why did the General Strike of 1926 take place? A general strike is when a group of workers from different industries all stop work in support of each other to win certain demands. This would bring the country to a halt and make it very hard for the Government to resist giving in to demands. The general strike of 1926 was mainly for the miners, they had low pay and long hours. They wanted better conditions and equal rights for all. In this essay I shall assess the events leading up to the strike and have a look at all the short and long term causes of the strike. The coal industry before the war was booming. It was used for nearly everything and during the war the demand for coal increased even more. Because coal production was so important to the war effort the Government took over the ownership of the mines and ran them instead of the private owners. Improvements were made in conditions and pay for most miners. When the Government nationalised the mining industry miners hoped it would continue after the war. But in 1921 all mines were retuned to private owners. After the war the coal mining industry went into decline. This was because, oil was used as a fuel (especially in shipping), electricity became available, more efficient boilers were made, other countries began to mine coal and British pits had been 'over mined' during the war and owners were reluctant to spend money modernising mines. ...read more.

The unions had learnt their lesson form Black Friday; a defeat for one union was a defeat for all. In the future they pledged to stand together. In 1925, coal prices fell yet again and owners wanted to cut wages just as they had done in 1921 but the miners were ready to strike developing the slogan, "Not a penny off the pay, not a minute on the day." This time the other industries went on strike with the miners. The Government weren't ready for a General Strike so they brought themselves time buy giving the mine owners a subsidy of �10 million, to keep wages at the same level as they were before the wage cuts were made. This event became known as Red Friday (Friday 31st July 1925) and was seen as a total success for the working class. It also showed what could be achieved if the Trade Unions worked together. However, it was announced the subsidy would only last 9 months - enough time for the Government to prepare for a General Strike. The Government set up a commission called the Samuel Commission, headed by Sir Herbert Samuel to deal with the problems of the coal mining industry. The short-term cause of the General strike was the Samuel Commission, the commission rejected nationalisation and said the government should end the subsidy. It agreed to wage cuts and said working days should be 7/8 hours long. ...read more.

The General Strike began on Monday 4th 1926. The TUC argued that the miners were facing longer hours with lower pay, imposed by mine owners to keep profits up. They said it was an Industrial Dispute between bosses and their workers. The TUC also believed if the miners were defeated it would lead to lower wages for all workers. It was a struggle for all working class people not just he people. The Government argued this was a Constitutional issue and that the Trade Unions were building up their strengths to overthrow the Government. The Government did this to worry people and get them to side with the Government and it worked. I agree with the TUC they only want better pay and conditions. They do not want to take over the Government. The General Strike in 1926 started because of the conditions of the miners. Other workers realised if the didn't support the miners their bosses may lower their wages knowing nothing shall be done. This is why the TUC found the idea of a General Strike appealing, they knew if they stuck together their demands should be met - especially after Black Friday. The Government did not want nationalisation, they were prepared and ready for the prospect of a General Strike and the is why they won in the end. I feel the TUC should have been more prepared although the idea of a General Strike is theoretically unstoppable there were measures the Government could take and they should have been more aware. Raisa Karolia 10c ...read more.