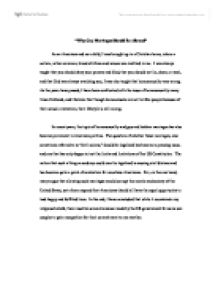 "Why Gay Marriages Should Be Allowed" As an American and as a child, I was brought up in a Christian home, where a certain, rather common, breed of ethics and values was instilled in me. I was always taught that you should obey your parents and God, that you should not lie, cheat, or steal, and that God was always watching you; I was also taught that homosexuality was wrong. As the years have passed, I have been confronted with the issue of homosexuality many times firsthand, and I believe that though homosexuals are not terrible people because of their sexual orientation, their lifestyle is still wrong. In recent years, the topic of homosexuality and gay and lesbian marriages has also become prominent in American politics. ...read more.

its belief of the separation of church and State, therefore, those opponents of same-sex marriages are left with the task of creating a case for themselves from the Constitution and legal precedents alone. I myself attempted to do this as well, reading through past legal cases and combing the Constitution for loopholes that would somehow allow my ethical beliefs to be justified by the States. However, as much I did search with intention, I finally came to the conclusion that I could not find a good case to support my claim against same-sex marriages. The foundation of America is based up the belief that every man, and recently, every woman, has the right to "life, liberty and the pursuit of happiness." Indeed, it appears that through prohibiting the union of one person to another based on their gender could be seen as a grave violation of this dearly beloved credo. ...read more.

However, once such a bond is recognized by the American government, it should logically follow that these couples would then be enabled to receive the same rights and responsibilities as their heterosexual counterparts in the eyes of the State. In summary, while I personally do not believe in the idea of gay marriages, I do not believe such "civil unions" can constitutionally be denied by the State. Heterosexuals are given every right to pursue happiness with their life partners, and so it does not appear that, from a legal standpoint, such a right can be denied to homosexual couples. Under the hospices of a "civil union," homosexuals would thus be able to publicly commit themselves to their life partners and accordingly be afforded the same privileges as those which their heterosexual counterparts enjoy. Homosexual unions should be legalized in the American system of government. ...read more.