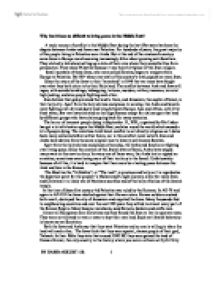 Why has it been so difficult to bring peace in the Middle East? A major source of conflict in the Middle East during the last fifty years has been the dispute between Arabs and Jews over Palestine. For hundreds of years, the great majority of the people living in Palestine were Arabs. But at the end of the nineteenth century some Jews in Europe were becoming increasingly bitter about growing anti-Semitism. They started to talk about setting up a state of their own where they would be free from persecution. They chose Palestine because it was there birthplace of the Jews religion. Small numbers of these Jews, who were called Zionists, began to emigrate from Europe to Palestine. By 1914 about one tenth of the country's total population were Jews. Since the return of the Jews to their 'homeland' in 1948 the two races have fought over what they both claim to be their Holy land. The conflict between Arab and Jews still rages, with suicide bombings, kidnapping, tortures, murders, military invasion, terrorist high jacking, and also people fighting each other. Jews believe that god promised the land to them, and Jerusalem, the capital of Israel, is their holy city. ...read more.

They also speak the same language, Arabic. In 1917 the British were very keen to bring the United States into the First World War against Germany. The British believed that the Jews in America could influence third government's actions and so Britain declared its support and promised to protect the Jews for its homeland in Palestine. This declaration was made in the form of a letter to Lord Rothschild a leading British Jew. In November 1917 it became known as the Balfour Declaration because it was signed by the British foreign secretary, Arthur James. In May 14th 1948 the last British troops who had been protecting Palestine, even though there had been Jewish "terrorist" attacks against them they left. Straight after that the Arabs army attacked the new state of Israel. Then followed by the horrors of the Nazi holocaust in World War Two, when 6 million Jews were slaughtered. The Jews were now desperate to escape Nazi persecution and in huge numbers they immigrated to Eastern Europe, Russia and Palestine. During the Second World War the British did not allow newcomers and ships to enter because to keep the trouble down. ...read more.

On the Jewish day of Atonement an Israeli national holiday on October the 6th, Egyptian forces blasted their way through the sand defences, built around the Israeli lines at the Suez canal and succeeded in crossing the waterway. Many talks and negotiations had been led in order to bring the Jews and the Arabs to their agreements. For instance President Clinton of the USA had led a "road mp for peace" however it proved unsuccessful as both sides find it impossible to come to compromise, if one side says one thing and the other side says the opposite. As a historian it would give a critical to look at what a neutral outsider would think of to entire conflict, as it would give a better outlook to bring peace in the middle east, as it would present us a view that does not favour any side and would make the whole subject of the intractable Middle East conflict more easier to understand and judge for ourselves. Currently there seems to be no sight of peace in the Middle East as both sides are stubborn and opposing in whatever the other side says. ?? ?? ?? ?? 1 BY HABIB AKKURT 11R ...read more.