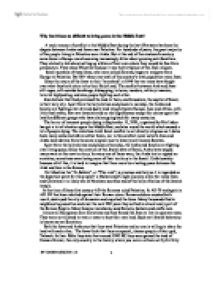 Why has it been so difficult to bring peace in the Middle East? A major source of conflict in the Middle East during the last fifty years has been the dispute between Arabs and Jews over Palestine. For hundreds of years, the great majority of the people living in Palestine were Arabs. But at the end of the nineteenth century some Jews in Europe were becoming increasingly bitter about growing anti-Semitism. They started to talk about setting up a State of their own where they would be free from persecution. They chose Palestine because it was the birthplace of the Jews religion. Small numbers of these Jews, who were called Zionists, began to emigrate from Europe to Palestine. By 1914 about one tenth of the country's total population were Jews. Since the return of the Jews to their 'homeland' in 1948 the two races have fought over what they both claim to be their Holy Land. The conflict between Arab and Jews still rages, with suicide bombings, kidnapping, tortures, murders, military invasion, terrorist highjacking, and also people fighting each other. Jews believe that God promised the land to them, and Jerusalem, the capital of Israel, is their holy city. Apart from the holy shrines and places to worship, the Arabs and Israelis are fighting over dry and dusty land lying between Europe, Asia and Africa, with little fresh water, few raw materials and no real significance except for claims upon that land by different groups who have claims going back for many centuries. ...read more.

The Jews think that they are special, chosen people of their god, Yahweh. In their Bible they state that around 1300 BC they were gained the land of Canaan forever, the only country in the history where you were a citizen not by birth by religion. The Arabs think that they have stayed longer than the Jews and also the have a higher population in the country. In 1917 the British were very keen to bring the United States into the First World War against Germany. The British believed that the Jews in America could influence third government's actions and so Britain declared its support and promised to protect the Jews for its homeland in Palestine. This Declaration was made in the form of a letter to Lord Rothschild a leading British Jew. In November 1917 it became known as the Balfour Declaration because the British foreign secretary, Arthur James, signed it. By 1918 both the Jews and the Arabs believed that they had the right to rule themselves in their own land - Palestine. Both the Jewish and the Arab communities fought each other in the years 1936 - 1939 the Arabs unfolded a revolt against the British. The very first problem that the British authorities had to confront was the increase in Jewish immigration. Jews were purchasing land and would not employ Arab workers, who may have been working on that land for their whole life. ...read more.

In six incredible days in summer of 1967, Israeli forces managed to conquer the Gaza Strip, the Golan Heights, and the West Bank, including the old city of Jerusalem, defeating simultaneously the armies of Egypt, Jordan and Syria. At the time it was clear to Israeli leaders that they would not be able to hold the lands that they conquered so swiftly the exception of the old city Jerusalem. That all changed when settlers quickly moved into the occupied territories and created many settlements. Tension had been building throughout the first half of 1967 with Israel warning the Arab states to end their support of the Arab Guerrillas raiding Israel from neighbouring countries. The war of 1973 as well as been called the Yom Kippur war also at the times is named as the war that led to peace. In this war it was finally Israel turn to be taken by surprise. As a historian it would give a critical to look at what a neutral outsider would think of to entire conflict, as it would give a better outlook to bring peace in the middle east, as it would present us a view that does not favour any side and would make the whole subject of the intractable Middle East conflict more easier to understand and judge for ourselves. Currently there seems to be no sight of peace in the Middle East as both sides are stubborn and automatically oppose in whatever the other side says ?? ?? ?? ?? 1 BY HABIB AKKURT 11R ...read more.