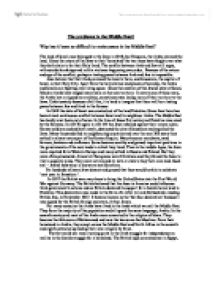 Why has it been so difficult to make peace in the Middle East?

The problems in the Middle East! Why has it been so difficult to make peace in the Middle East? The land of Israel once belonged to the Jews in 1948, but Diaspora, the Arabs claimed the land. Since the return of the Jews to their 'homeland' the two races have fought over what they both claim to be their Holy Land. The conflict between Arab and Jew still rages, with suicide bombings and militia violence happening every day. Because of the nature and age of the conflict, perhaps a lasting peace between Arab and Jew is impossible. Jews believe that their God promised the land to them, and Jerusalem, the capital of Israel, is their Holy City. Apart from the holy shrines and places of worship, the Arabs and Israelis are fighting over living space. Since the creation of the Jewish state of Israel, Moslem Arabs have waged many wars on the new territory. In every one of those wars, the Arabs lost or signed an armistice, sometimes even losing more of their territory to the Jews. ...read more.

This declaration was made in the form of a letter to Lord Rothschild a leading British Jew, in November 1917. It became known as the 'bal four declaration' because I was signed by the British foreign secretary, Arthur James. For many centuries the Arabs have lived in the lands which we call the Middle East. They form the majority of the population and all speak the same language, Arabic. In the seventh century ad most of the Arabs were converted to the religion of Islam. They become the followers of Mohammed and now the known as the Muslims. From their homeland in Arabia, they swept across the Middle East and North Africa in the seventh and eighth centuries spreading their new religion by force. The fist world war was a turning point in the Arab struggle for independence as well as in the Jewish struggle for a homeland. The British high commissioner in Egypt, Sir Herbert Mc Mahon.If the Arabs fought against Turks, Britain would be prepared to recognise and support the independence of the Arabs. ...read more.

In 1936, widespread fighting broke out as armed Arab bands attacked Jewish settlements. The British responded harshly. They hanged several Arab leaders and destroyed houses suspected of containing Arab terrorists of arms. They also helped to organize the Jewish defence force, the haganah. In 1937 the British government recommended the partition of Palestine into two separate states, one Jewish and a second Arab state. The Arabs rejected it and the fighting continued. With the help of more troops better weapons and transport, the British forces gradually regained control of Palestine. By 1939, when the rebellion ended, the British government had given up all further ideas of partition. It declared that Britain would continue to rule Palestine. It also said that it would restrict Jewish immigration. The British government adopted this policy because war was approaching and it feared the growth of friendship between Arab leaders and Germany. Britain needed to keep the friend ship of the Arab countries so that oil supplies from the Middle East would continue to reach Britain. The jews were furious. Thousands took the streets to demonstrate. ...read more.