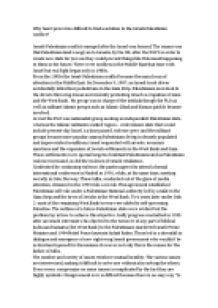 Why has it proved so difficult to find a solution to the Israeli-Palestine conflict?

﻿Why has it proved so difficult to find a solution to the Israeli-Palestinian conflict? Israeli-Palestinian conflict emerged after the Israel was formed. The reason was that Palestinian land was given to Israelis, by the UK, after the WW2 in order to create new state for Jews so they could prevent things like Holocaust happening to them in the future. There were conflicts in the Middle-East that time with Israel but real fight began only in 1980s. From the 1980s the Israel-Palestinian conflict became the main focus of attention in the Middle East. On December 9, 1987, an Israeli truck driver accidentally killed four pedestrians in the Gaza Strip. Palestinians soon took to the streets throwing stones and violently protesting Israel?s occupation of Gaza and the West Bank. No group was in charge of the intifada though the PLO as well as militant Islamic groups such as Islamic Jihad and Hamas quickly became involved. At root the PLO was nationalist group seeking an independent Palestinian state, whereas the Islamic militants wanted region ? wide Islamic state that would include present-day Israel. ...read more.

Disagreement over is difficult because there is no easy way ?to split the difference? or divide matters of symbolic importance. For example: very controversial settlements buildings. All the talks have been stopped just because Israel refused to stop building them, even though UN and USA recognize them as illegal. Non-Middle Eastern countries provide belligerents with foreign allies and make regional hostilities part of larger global tensions. During the Cold War, Soviet-US hostility was reflected in Soviet support for Egypt, Syria and Iraq versus US support for Israel and Saudi Arabia. Today, complicating factors include European-American differences, the War on Terrorism, and outsiders? problems in balancing their views on the Palestine question against their need for Middle Eastern oil and their fear of inciting hatred in the Muslim World. Both the Palestinians and Israelis have fragile political systems and are confronted by powerful extremists. Under Arafat the Palestinian Authority was corrupt, authoritarian and inept and was divided among factions. As a result in early 2006 Palestinians gave Hamas a massive electoral victory and a mandate to form a government that must work with Mahmoud Abbas. ...read more.

In some respects, the boundary between Israel and Palestine symbolizes the confrontation of the developed and less-developed worlds. The length of time that the problem has festered and the presence of inflexible leaders and groups make the players more rigid. Only time will tell whether and for how long the cycle of violence will persist. In the end, lasting peace in the region ma not prove possible until one or several major powers physically intervene to separate the foes. In conclusion it can be said that the conflict is very complex and uneasy. Worsened by many factors such as extremists on both sides and right wing governments. Also it is a historical and so long rooted conflict, which was fought by generations before as well as present ones. Finding a solution will be difficult because as one problem will be solved another will occur. This was seen on recent talks, which were so hard to establish, and which failed because of Israeli refusal to stop illegal, recognized as illegal by UN and USA, settlements in the Middle East. Thus it can be said, that there is still a lot of job to be done and no real solution is established. ...read more.