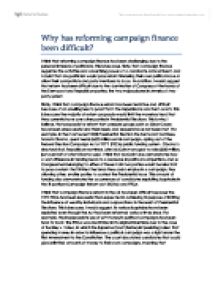 I think that reforming campaign finance has been challenging due to the personal interests of politicians. This is because, firstly, that campaign finance regulates the activities and advertising power of a candidate or incumbent, and I doubt that any politician would pass reform hindering their own political race or allow their compatriots and party members to do so. In addition, I would suggest that reform has been difficult due to the domination of Congress at the hands of the Democrat and Republican parties, the two major players in America’s two-party system.

Firstly, I think that campaign finance reform has been tentative and difficult because of an unwillingness to pass it from the Republicans and Democrats. This is because the majority of reform proposals would limit the monetary lead that they currently have over other parties in Presidential Elections. This is why, I believe, that proposals for reform from pressure groups such as Clear Cause have been unsuccessful and their needs and requests have not been met. For example, in the most recent 2008 Presidential Election the Democrat nominee, Barack Obama, spent nearly $650 million on his campaign, opting out of the Federal Election Campaign Act of 1971 (FECA) public funding system. Obama’s electoral rival, Republican nominee John McCain managed to raise $360 million, just over half of what Obama used. I think that McCain’s loss demonstrates how a vast difference in funding leads to a decrease in political competition, and so Congressmen belonging to either of these main two parties would be reluctant to pass a reform that limited the funds they could employ in a campaign, thus allowing other, smaller parties to contest the Presidential race. This amount of funding also demonstrates the occurrences of candidates exploiting loopholes in the Bi-partisan Campaign Reform Act (BCRA) and FECA.

I think that campaign finance reform in the US has been difficult because the 1971 FECA has been less useful than expected in achieving its purpose of limiting the influence of wealthy individuals and corporations in the result of Presidential Elections. This is because, I would suggest, its various loopholes have been exploited even though the Act has been reformed various times since. For example, the inappropriate use of soft money in political campaigns has been hard to track. The FECA was also limited in its original intentions due to the case of Buckley v. Valeo, in which the Supreme Court (Rehnquist presiding) ruled that spending money in order to influence a political campaign was a right under the First Amendment to the Constitution. The court also stated candidates that could give unlimited amounts of money to their own campaigns, meaning that wealthy candidates such as George W. Bush in 2004 have more of a chance of winning an election than independents without considerable wealth. In addition, ‘soft’ money has been used as a loophole attempt to aid a campaign (even though it ought not to) through grassroots help in States and voter drives which, albeit indirectly, do influence a candidate’s campaign. An example of this is an event in the 2008 Presidential election which involved an advert in South Carolina urging people to pressure Congress to pass the Wounded Warriors Act. This advert featured a strong positive image of McCain and as such would indirectly influence voters to vote for him, yet the advert was paid for by a group set up by McCain supporters in an attempt to aid his campaign. This is an example of barely legal soft money tactics, and I think that it is a good representation of candidate’s exploitation of loopholes in finance legislation, going some way to explain why campaign finance reform in the US has been difficult.

The BCRA, or McCain-Feingold reform has also encountered difficulties with loopholes. For example, the practice of ‘bundling’, a process by which large amounts are collected from groups and donated by one person has become common, perhaps best exemplified by ‘HillRaisers’, a group dedicated to raising money for Hillary Clinton’s 2008 Presidential campaign. These groups differ from PACs in that they are not Trade Unions/corporations, but groups of like-minded people. However, they are similar in that they bypass both FECA and BCRA, wit Supreme Court backing due to the case of FED v. NIPAC in which the Supreme Court ruled that PACs had no cap on how much they could donate to a candidate.

To conclude, I think that campaign finance reform has been difficult in the US both because of political opposition and the fact that both the FECA and CRA reforms have various loopholes through which it is possible for organisations such as PACs to donate unlimited amounts of money to a political campaign. This, I think, preserves the two-party system in America and discourages political discourse and conjecture in favour of a funding contest between the Democrats and Republicans every four years. We can see this, I think, in both Kerry’s 2004 defeat and Obama’s 2008 win, where I would suggest funding was the primary factor.