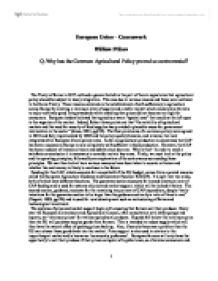 Why has the Common Agricultural Policy proved so controversial?

European Union - Coursework William Wilson Q. Why has the Common Agricultural Policy proved so controversial? The Treaty of Rome in 1957 outlined a general belief on the part of the six signatories that agricultural policy should be subject to heavy integration. This was due to various reasons and these were outlined in the Rome Treaty. These reasons centered on the establishment of self-sufficiency in agriculture across Europe by creating a minimum level of supply and a stable market which would allow farmers to enjoy relatively good living standards whilst ensuring that prices did not become too high for consumers. European leaders believed that agriculture was a "special case" that could not be left open to the vagaries of the market. Indeed, Robert Jones points out that "the volatility of agricultural markets and the need for security of food supplies has provided a plausible cause for government intervention in the sector" (Jones, 2001, pg210). The final provisions of a common policy were agreed in 1962 and fully implemented by 1968 and the policy quickly became, and remains, the most integrated of all European Union policy areas. As far as agricultural production is concerned, the CAP has been a success as Europe is now completely self-sufficient in food production. ...read more.

Others complain that such stockpiles are costly. This argument may carry some weight as it must be remembered that costs will include paying for storage facilities as well as the means to transport surplus goods to warehouses. The costs of purchasing the food surpluses are also an issue. One of the most prominent goals of CAP was to ensure low prices for consumers. However, it is debatable whether this has been achieved. The CAP costs around fifty billion euros (or roughly about thirty five billion pounds). This money is taken from the EU budget, and as we already know, accounts for around half of it. Since the EU budget results from taxation on member state's citizens it may be fair to suggest that consumers are paying more indirectly for their food. Furthermore, it is difficult to suggest that food prices in Europe are low on a global level. Only once since the establishment of the CAP have average food prices in the rest of the world been lower than in the EU, in 1974 (Jones, 2001, pg218). Admittedly, however, EU households spend just fifteen per cent of household income on food as opposed to fifty eight per cent in Romania or fifty four per cent in Bulgaria (Wallace and Wallace, 2000, pg201). ...read more.

Direct income support for farmers in place of price support mechanisms became more favoured. Farmers would also be rewarded for not growing crops on some parts of their land. This would reduce surpluses by bringing down supply. Although, the EU has made attempts to stand up to criticisms of the CAP it is still viewed with suspicion by many and this criticism is only likely to increase in the next few years. An influx of new members form Eastern Europe which have major agricultural sectors (far and above anything possessed by the existing members) will require more finance which may be unsustainable if the current system remains in place. It is clear that the Common Agricultural Policy is a highly controversial matter for various reasons. The fact that it benefits some states more than others, its lack of relevance to the modern world, the high costs of its operation, the inability to secure low food prices, inequalities in the farming community, international conflicts, fraud, the negative effect on the environment and the likely cost of European expansion have all meant that it is seen by many as a waste of time and resources. It has been that way throughout its existence, despite efforts at reform. We can be certain that CAP will remain controversial in future as it faces up to new problems but it must avoid trying to deal with these with old solutions. ...read more.