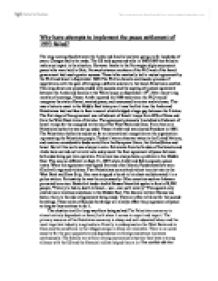 Why have attempts to implement the peace settlement of 1993 failed? The long running feud between the Arabs and Israelis has been going on for hundreds of years

Why have attempts to implement the peace settlement of 1993 failed? The long running feud between the Arabs and Israelis has been going on for hundreds of years. Changes had to be made. The US held sponsored talks in 1992/1993 but failed to make any impact in the situation. However thanks to the Norwegian diplomacy secret peace talks were held in Oslo, Norway between members of the PLO and of the Israeli government had much greater success. These talks eventually led to mutual agreement by the PLO and Israel in September 1993.The PLO an Israelis continued a process of negotiations with the goal of bringing a definite solution to the Israel-Palestinian conflict. This long drawn out process ended with success and the signing of a peace agreement between the Arabs and Israelis at the White house on September 13th. ...read more.

Today it has an observer status in the United Nations, and receives considerable funds as aid from the European Union, the United States and Israel. But all this work was always in vain. Extremists from both sides of the Israelis and Arabs have carried out terrorist acts and prevent the final agreement of peace between both sides being put into operation. Terrorism has always been a problem in the Middle East. This was no different on Sept.14, 1993 when Arafat and Rabin signed a peace treaty. When this agreement was signed Iran and other Islamic Fundamentalists were filled with rage and violence. Two Palestinians committed violent terrorist acts in the West Bank and Gaza Strip. One man strapped a bomb to his chest and detonated it in a police station. ...read more.

There is no social security for the poor population and dependence on foreign assistance increases continuously. The Israelis are within a strong economical situation they have a strong alliance with the US and the financial aid has helped them a lot The conflict with the Palestinians has a large impact on the Israeli society and mainly due to religion with about 1 fifth of the community being non-Jewish. The Israelis are trying to build a wall in Palestinian territory to prevent further attacks on there land. Obviously this will have consequences it will effectively isolate Palestinian population centers from one another, and restrict not only freedom of movement of individuals but also of goods and services, thereby worsening an already crippled Palestinian economy. This may start more upheaval along with the continued battle with the terrorism. All these issues are effecting the progression of peace between both sides and still today the situation is along way from being solved ...read more.