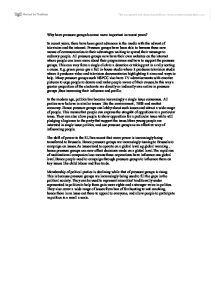 why have pressure groups become more important in recent years

Why have pressure groups become more important in recent years? In recent years, there have been great advances in the media with the advent of television and the internet. Pressure groups have been able to harness these new means of communication to their advantages waiting to spread their message to ordinary people. All pressure groups now have their own websites on the internet where people can learn more about their programmes and how to support the pressure groups. This can vary from a single click to a donation or taking part in a rally sorting a cause. ...read more.

In the modern age, politics has become increasingly a single issue consensus. All parties now believe in similar issues like the environment , NHS and market economy. Hence pressure groups can lobby about such issues and attract a wide range of people. This means that people can express the stragnht of oppsitions to a particular issue. They can also allow people to show opposition for a particular issue while still pledging allegiance to the party that support the issue.More young people are intereted in single issue politics, and use pressure groups as an effective way of influencing people. ...read more.

Membership of poltical parties is declining while that of pressure groups is rising. This is because pressure groups are increasingly being used to fill the gaps in the political society. They can be used to represent minorities' traditionally under represented in politics to help them gain more rights and a stronger voice in politics. They also cover a wide range of issues from ban of fox hunting to anti smoking, hence there is an issue out there to appeal to everyone, and allow people to participate in politics in a small a scale. ...read more.