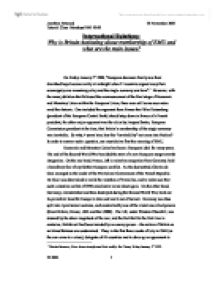 Why is Britain hesitating about membership of EMU and what are the main issues?

International Relations: Why is Britain hesitating about membership of EMU and what are the main issues? On Friday January 1st 1999, "European dreamers finally saw their cherished hope become reality at midnight when 11 countries signed away their sovereignty over monetary policy and the single currency was born".1 However, with the mass jubilation that followed the commencement of the final stage of Economic and Monetary Union within the European Union, there were still some sour notes amid the rhetoric. One included the argument from France that Wim Duisenberg (president of the European Central Bank) should step down in favour of a French president; the other major argument was the claim by Jacques Santer, European Commission president at the time, that Britain's membership of the single currency was inevitable. So why, 4 years later, has this "inevitability" not come into fruition? In order to answer such a question, one must derive first the meaning of EMU. Economic and Monetary Union has been a European ideal for many years. The end of the Second World War heralded the start of a new European surge towards integration. On the one hand, France, left in ruins by occupation from Germany, held a hereditary fear of any further European conflict. As the dust settled, Charles de Gaul emerged as the leader of the Provisional Government of the French Republic. De Gaul was determined to avoid the mistakes of Versailles, and to make sure that such a situation as that of 1939 could never come about again. On the other hand, Germany, overstretched and then destroyed during the Second World War, held out its proverbial hand for Europe to take and lead it out of turmoil. Germany was thus split into 4 provisional sections, each controlled by one of the victorious allied powers (Great Britain; France; USA and the USSR). The UK, under Winston Churchill, was stunned by the shear magnitude of the war, and the fact that for the first time in centuries, British soil had been invaded by an enemy power - the notion of Britain as an Island fortress was undermined. ...read more.

First off, in joining EMU, a state must relinquish its power of control over Monetary Policy. Monetary Policy refers to Supply Sided Economic policy whereby Interest Rates are set to regulate the cost of borrowing to consumers and firms. The Bank of England currently sets interest Rates through its Monetary Policy committee. The committee looks at figures from the previous 3 months, reviews the last 12 months, and examines projected figures for the future year, and thus sets a Rate of Interest that it believes will benefit the economic environment. The Interest Rate set then has two effects: 1) It regulates the cost of borrowing money to Commercial Banks, firms and individuals, thus directly affecting the availability of funds, and indirectly affecting levels of inwards investment and consumption in the economy; 2) It sets the interest incurred on savings, thus either encouraging or discouraging individuals to put money away into high interest accounts for future expenditure. Therefore, Interest Rates are seen as the main Government tool for curbing inflation, as they are used to slow down an over-heating economy, or fuel an economy in recession. Also, the Bank of England can regulate the money supply in the economy through Liquidity Ratios. All Commercial Banks and Building Societies have accounts with the Bank of England, which then sets a Liquidity Ratio, determining how much cash a commercial bank is allowed to make available for investment. Therefore, this again limits the circular flow of income in the economy, and as a direct result of a Keynesian Multiplier effect, can determine the extent of economic growth. The Bank of England also controls the money supply more directly. It decides based on reviews and prospected figures how many notes to print, and how many coins to mint, and thus controls directly the amount of money in the economy. Therefore, the Bank of England is understandably dubious about releasing its grip on monetary policy to a central bank in Brussels. ...read more.

The UK is currently Denmark's third largest supplier with nearly 10% of the market. UK exports to Denmark amounted to �2.7 billion in 2002 and is the UK's 13th most important export market.8 Sweden offers attractive opportunities for UK exporters. Trading links, which go back centuries, are strong and it is the UK's 9th largest and most important export market. The UK's trade in goods with Sweden was �4.19 billion in 2000, second only to Germany as its largest supplier9. Therefore, the fact that these two countries both said no to the proposal of EMU, suggests that the UK might be wise to stay out of it also for the time being. As well as this, since the Iraqi war, a strong link with the United States of America has been formed - more importantly a strong link between Tony Blair and George Bush. To march the UK into EMU at this current time, amidst the international political and social situation between these two countries, might be considered to be ill advised, as Britain tries to grow a prosperous relationship with her Atlantic cousins. In Paradise Lost, John Milton described Hell as containing a furnace, but "from those flames no light, but rather darkness visible". So far the flames of the European debate have shed a remarkable amount of gloom on the subject of the single European Currency, and the EMU. The positive approaches by Tony Blair and Eddie George (Governor of the Bank of England) have helped to dispel some of this fog and kick-start the real discussion. There is no doubt that the Government is in favour of further intervention in Europe, but a degree of hesitancy is understandable from Gordon Brown's position, as perhaps the people of Britain are not yet ready to accept a break with the past and Monetary Subservience to the omnipotent ECB. However, there is a growing fear amongst Economists that Britain should join as soon as possible, or not at all, as the substantial benefits of EMU are withering and eroding as British Politicians debate over the issue. ...read more.