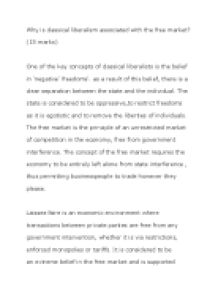 Why is classical liberalism associated with the free market?

﻿Why is classical liberalism associated with the free market? (15 marks) One of the key concepts of classical liberalists is the belief in 'negative' freedoms'. as a result of this belief, there is a clear separation between the state and the individual. The state is considered to be oppressive,to restrict freedoms as it is egotistic and to remove the liberties of individuals. The free market is the principle of an unrestricted market of competition in the economy, free from government interference. The concept of the free market requires the economy to be entirely left alone from state interference , thus permitting businesspeople to trade however they please. ...read more.

The idea of the 'invisible hand' is used to explain his idea of how economic problems such as unemployment and inflation are removed as a result of the mechanisms of the market. A free market can lead to economic efficiency, for each firm is egotistical and therefore wishes to achieve its maximum potential. for this reason, free market economics, as advocated by Adam Smith, is inherently associated with classical liberalism. This argument of 'self regulation' with in the free market therefore links free market economics to social Darwinism. Classical liberalism has a harsh approach to poverty and social inequality. ...read more.

This concept clearly supports the idea of humans being self-interested, egotistical individuals, thus demonstrating how free market economics and classical liberalism are associated. Free market economics is also supported by the concept of free trade. David Ricardo focused on 'comparative advantage', which was viewed as a fundamental argument in favour of free trade. This concept takes the belief that each country gains by specialising in the good in which it enjoys a comparative advantage, and trading that is good for the other. He sees this as a fundamental argument for free marker economics, because the individual is self interested and by having the freedom to produce their ow specialised product, they can become the wealthiest, demonstrating how free market economics and classical liberalism is linked. ...read more.