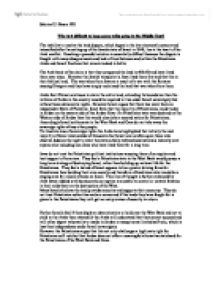 Why is it difficult to keep peace talks going in the Middle East?

Why is it difficult to keep peace talks going in the Middle East? The inability to resolve the land dispute, which began in the late nineteenth century and intensified after the setting up of the Jewish state of Israel in 1948, lies at the heart of the Arab conflict. Reaching a peaceful solution is essentially difficult because the dispute is fraught with many disagreements and lack of trust between and within the Palestinian Arabs and Israeli fractions that remain locked in battle. The Arab basis of the claim is that they conquered the land in 600AD and have lived there ever since. However the Jewish viewpoint is Jews lived there first and that this is their biblical land. This was taken from Jews as a result of a war with the Romans causing Diaspora and they have simply reclaimed the land that was taken from them. Arabs feel if Israel continues to claim the entire land, extending its boundaries then the millions of Arabs in the country would be required to live under Israeli sovereignty but without basic democratic rights. However Israel argues that there has never been an independent State of Palestine. Israel feels that the majority of Palestinians reside today in Jordan on the eastern side of the Jordan River if a Palestinian state was declared on the Western side of Jordan than this would clearly be a second nation for Palestinians. Accordingly Israeli settlements in the West Bank and Gaza do not take away the sovereign rights of any other people. To illustrate loss of sovereign rights the Arabs have highlighted that initially the vast majority of Jews lived outside of Jerusalem but Israel now confers upon those who observe Judaism the right to enter the state as fully enfranchised nationals instantly over anyone else including non-Jews who have lived there for a long time. Jews do not trust the Palestinian political institutions accusing them of corruption and tacit support of terrorism. ...read more.

and also Britain did not want the oil fields to fall into hostile hands. Eager for an ally and support against Turkey they approached the Arabs through their High Commissioner in Cairo, Sir Henry McMahon. A letter written by McMahon on 24th October 1915 to the Sherif of Mecca, clearly stated " Great Britain is prepared to recognise and support the independence of the Arabs in all regions with the limits demanded by the Sherif of Mecca" In November 1917 Arthur Balfour, the British Foreign Minister sent a letter to Lord Rothschild a prominent supporter of Zionism. In the letter Balfour offered government support for "the establishment in Palestine of a national home for the Jewish people" In fact by the time World War I ended Britain had made 2 different and contradictory proposals : 1) to help the Arabs set up their own states in the Middle East 2) To give Jews their own national home in Palestine. The effect of these proposals meant that neither Jews nor Arabs trusted Britain. Following the 1919 Peace Talks Britain was given the Mandate and hence responsibility for overseeing Palestine and bringing it to self-government. However the Jews fared well during the mandate since the British appointed a Jew Sir Herbert Samuel as High Commissioner of Palestine whose sympathies inevitably lay with the Jews. By the end of 1920 10,000 Jewish immigrants had arrived in Israel since the end of the World War I, they established their own force and the General Federation of Jewish Labour promoting further immigration and settlement. Perhaps by dividing Palestine into Arab and Jewish areas as soon as the mandate was established, Britain could have avoided this conflict. The British were an uncertain government of the Palestinian mandate between the wars and failed to control the violence between Jews and Arabs by the later 1930s which was approaching new heights of ferocity. ...read more.

Even after 1993 when progress was made the UN function's as a supporter and not an inititator. However the UN has won respect from all parties for its work caring for Palestinian refugees. It set ug the UN relief and Works Agency for Palestine Refugees. In my opinion International efforts today genuinely aim to reach peace but this was not always the case e.g. during the Cold War. Also they were initially not quick enough e.g. had the superpowers or the UN stepped in the moment the fighting started in 1948 decades of turmoil might have been avoided. Consequently it is International interactions (or lack of ) that have served to perpetuate the conflict making it the most enduring in Arab-Israeli history . seemed to have no policy towards Palestine other then trying to contain the violence. Therefore poor handling of the mandate by the British was a major cause of the future Arab-Jewish conflict. Alienated the arabs In the 1950s communist Soviet Union and the democratic capitalist United States were trying to outdo each other in attracting allies around the world. These superpowers were set against each other in the Middle East to deepen and intensify the Arab-Israeli conflict whilst fuelling hostility of the Cold War Arabs do not trust west feel they are supporting Israel and feel their prime interest is in Oil therefore wanting an ally in Israel rather then supporting Palestine. A few countries are biased in the argument. However it non-Muslims countries are now uncertain of Islam. Terrorist attacks have forced distant observers to choose to support. Nature of attacks have made it a religious war there have been over 18000 violent attacks on Israeli targes since September 2000, of which many have been carried out against sites which are holy to the Jewish people or taken place on communal religious occasions these attacks are therefore regarded as an attack on the heritage of the Jewish people- consequently brings religion into the argument. Sabrina Ul-Hasan 10R ...read more.